And The People Rejoiced...

Actually, I think the Great Uniform SWAP and the Hannah Andersson SWAP will have to form a power-sharing coalition. By consolidating their votes they can maintain complete control of the Sewing Room, sweeping aside the flimsy arguments of the I-Desperately-Need-A-New-Purse Party and the What-The-Hell-Am-I-Going-To-Wear-This-Winter Party. The Uni-Andersson Coalition will triumph in Sewing Room politics. And so, Citizens of the Sewing World, we move on to the order of the day. Which is: Polo.

Polo, like most sports, is a war game. In fact, I think it was originally played using the severed heads of vanquished foes or something like that. In any case, it's all about blood-thirsty battle and hacking your enemies into gorey pieces until they lie sobbing on the ground in a state of utter humiliation and/or death. This, of course, makes it the logical inspiration for elementary-school uniforms.

99% of the school uniforms in this town, indeed the entire country, involve some form of a polo. Sure, the school says you can wear a blouse or a "shirt", but does anyone actually dare to do such a thing? No. The Polo Syndicate clearly has a hold on the uniform market.

OK, so polo shirts are "basic" and "standard" and so (apparently) make good uniforms. I get that. They can also be easily purchased from various places in Hell-- I mean The Mall-- for a few nickles and a handful of beans. I'm sure there are sweatshops in Kenya or Hong Kong or Saskatoon filled with busy, consumption-ridden children creating the endless acres of polo shirts that fill our shops. I decided to save the children and make my own shirts.

I'm just that kind of person. I expect my Humanitarian Of The Year Award at any moment.


You know, I think I'll break this post up into multiple posts. I have a surprisingly large volume of things to say about polo shirts and the making thereof. Which is crazy, since I've only completed five. But I've been through several patterns and variations, so I think in the interest of having something to do over the next week (because I'm soooo short of things to do), and to keep this post from being longer than Gone With The Wind, I'll break it down.

And so, Citizens of the Sewing World, today I will simply leave you with this: 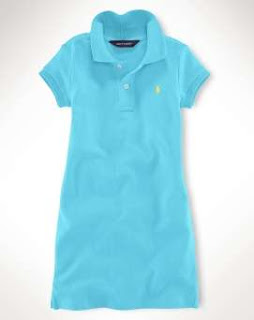 My polo dress. Size 5. I used an old shirt of my husband's... so whatever a slightly worn two-year-old shirt from WalMart is worth. Seriously. What, about five bucks? Next time: YOU CAN TOTALLY MAKE YOUR KIDS' UNIFORMS FROM OLD POLO SHIRTS! Is that cool or what?
Email ThisBlogThis!Share to TwitterShare to FacebookShare to Pinterest