Well, we're not Russian but...

Filed under: Ottobre 4-2009-21, Ottobre Design
We are shaped like peasants. It's genetic.

There are about fifty things in the 4-2009 issue of Ottobre that I would like to make. I especially like the Russian Peasant section, but then I've always been a sucker for Eastern European stuff (you know... vodka, borscht, that guy named Boris that I dated for a few weeks).

I started with pattern #21 "Anemone Stripes" tunic. This isn't a great photo, but it's what I have. 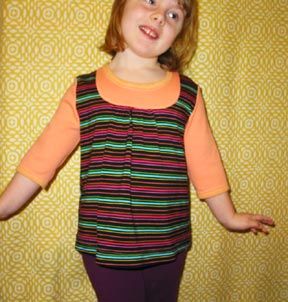 I made two versions of this t-shirt for TLo several weeks ago. I have to say, I'm really pleased with this pattern. I wasn't totally convinced about the sort of faux layered look from the magazine photos. But this shirt is just cute! It has a very nice shape and the faux layering thing isn't as tacky as I thought it might be. I know, I know... I should never have doubted the great Hepola design instinct.

Version 1 was made with that stripey black fabric as the main body and then two different scraps of orange and peach/orange knit. I wish that part showed up better in photos, I really like the subtlety of the two oranges. The peach is the bib and sleeve fabric and the orange is the sleeve and neck binding-- the picture above shows it a little bit better. Since I apparently have acres of the black stripey fabric on hand from a three-year-old FabricMart purchase, you could say this entire shirt was made from stash scraps. I still have acres of that fabric. 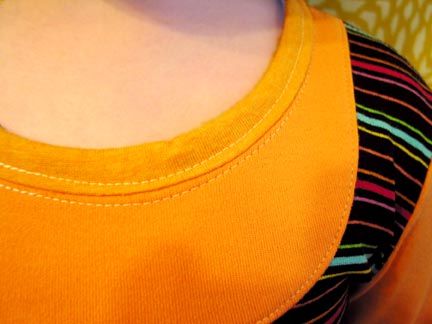 I like this t-shirt so much I'm tempted to make a few more, although it's sort of a very obvious look. I don't suppose you can really have too many of these in one wardrobe. Too bad, because the style fits TLo especially well (not that you can tell from the bad photo above), but it looks pretty good on The Big One too. She's worn version 2 twice already. Speaking of which: 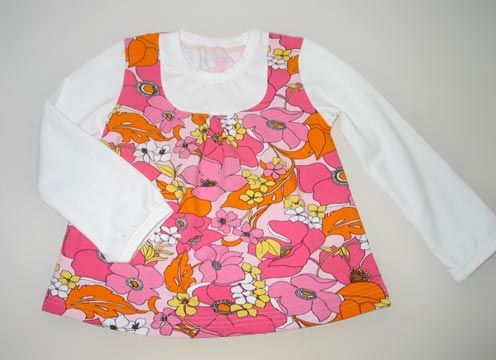 I did a sort of fake triple coverstitch on the hem (despite the fact that I have an actual triple coverstitch machine). This is because my first pass at the hem missed about 75% of the actual hemline. Doh! So I just ran over it again. This actually gave the hem a nice weight, the shirt hangs nicely now. The fabric is really heavy and has a lot of lycra in it so it could take the extra stitching. 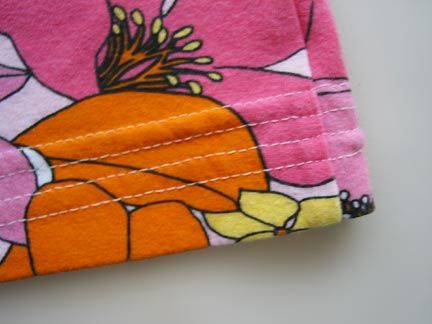 I think that's about all I have the strength for tonight, I'm off to bed. I am so glad it's Friday tomorrow. Although Saturday would, I suppose, be even better.
Email ThisBlogThis!Share to TwitterShare to FacebookShare to Pinterest