Ok, fine.  I stole that from The Colbert Report and The Onion.  It’s still funny.  We have a “snow day” here today, which probably would be more accurately called a “snow-on-top-of-inches-of-ice day”.  The news reports that all non-essential personnel at the city offices, the local state offices and the Air Force Base are to stay home today.  Everyone is asked to stay off the roads unless it’s essential, i.e. an emergency.  There’s a good inch of base ice under the four inches of snow we got last night.

So of course, my boss decided that we should all go in today.

So now while I ignore the Evil Monkeys whining about “going outsiiiiide”, I thought I’d post a photo of them in their jammies.  I made these before Christmas but never got around to taking pictures.  The Evil Monkeys love these nightgowns.  L-O-V-E love.  I like the graphic prints, which TLo picked out (mostly) by herself.  TLo has quite the visual sense. 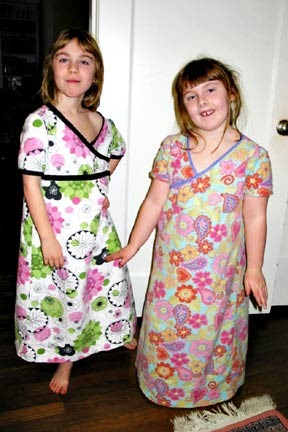 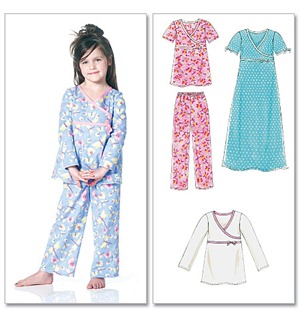 Total bedhead.  And I think The Big One has taken it into her bedhead that she can fly.  I’m not sure.  There seems little other explanation for this. 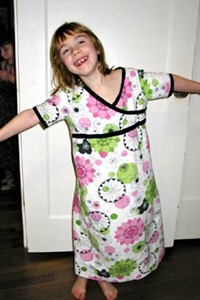 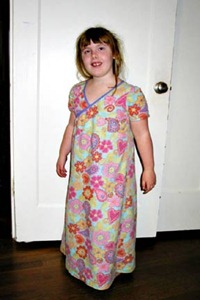 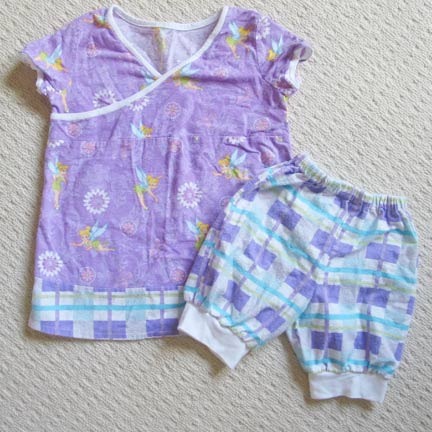 The pants and arms are bound with knit interlock, so they’re stretchy.  Because I bought small pieces of the flannel (do you know how much flippin’ Disney fabric costs, even on sale??) I had to piece in a sort of odd way.  But the Evil Monkeys love these too and should be able to wear them into spring.  They’re cuter on than they are on the floor.  So a winner.  (Sorry for the wrinkles, I don’t generally iron our jammies.  Well, let’s be honest.  I don’t generally iron anything.  So jammies are certainly at the bottom of the list.) 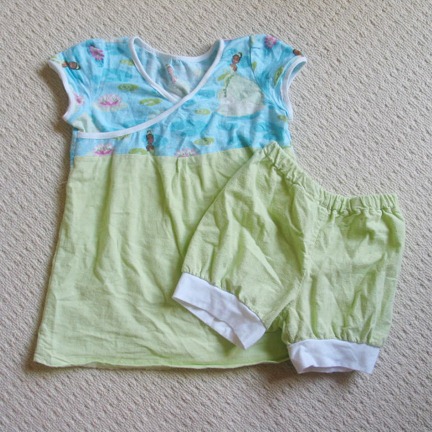 I altered the sleeve pattern to be more like a cap sleeve and obviously I made the pants into shorts instead of, you know, pants.  Besides slicing the pattern into pieced backs I think I followed the instructions for the most part because they were utterly basic, but I used a variety of bindings.  They called for bias tape and I only used that on the first nightgown (The Big One’s in black).  On TLo’s nightgown I used some lavender-colored FOE from the stash and on the nightie sets I used the white interlock on both.  I found, after doing The Big One’s first, that the bias tape didn’t really pull in the surplice fronts enough and they flopped around.  Using the FOE on TLo’s, I was able to stretch it so that the top snugs in a little and doesn’t flop.  Nice!

Great.  The Evil Monkeys are now Dressed To Go Outside.  That took about twenty minutes to accomplish.  So, about 10 times the actual length of time they’re likely to be outside. Any bets on when they’ll be back in complaining it’s too cold---?

Well.  If you had “twenty-five seconds”, you won.