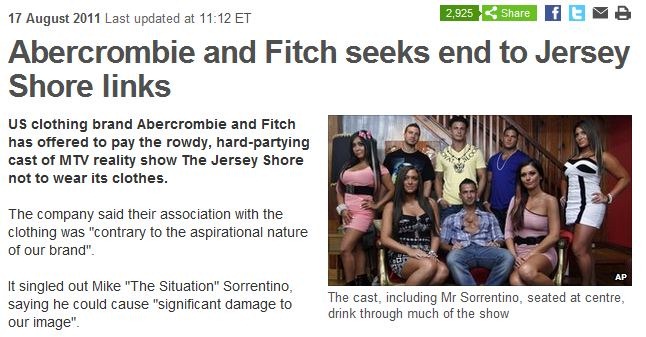 This made me laugh out loud at work.  Which isn't really a good thing.  Because then people want to know what I'm doing when I'm (theoretically) supposed to be working.  Because my job isn’t that funny.  Normally.

They're so annoying, wanting me to do actual work and whatnot.  Sheesh.

But this made me laugh.  Because really?  I think it's totally hilarious that a crass, mass-market-posing-as-exclusivity, "let's all pretend to be living in the Hamptons even though we really live in Indianapolis" clothing store has the nerve to claim to be offended by a crass, manipulated-and-edited-but-posing-as-real, "let's all run around like stereotypical idiots" TV show.

It's like a $500-a-night "escort" who's offended at being compared to a $10-an-hour meth ho.  I'm sorry.  You're both still prostitutes.  I think getting into the issue of "classiness" or a lack thereof is just semantics.

The best part?  This headline has been posted under "Also In The News" on BBC News for over twenty-four hours now.   Apparently, “Also In The News” is BBC code for “This Is Totally Ridiculous But We Thought You Could Use A Laugh Today… And Maybe Tomorrow Too”.

I was just telling Angie A. that watching reality TV is like binging on birthday cake: sure it's fun for a little while, but then you get all queasy and sick.  On the other hand, last night she recommended something called "Dance Moms" that really sounds too good to pass up and also last night my sister recommended something called "Family Restaurant" that, just based on my sister's impersonations of the participants, sounds like something I may have to watch.