At Least My Head Didn’t Spin Around. Yet.

Sometimes I wonder about my mental capacity.  (Trust me, so does The Husband.)

A few weekends ago I wasn't feeling very "sewy" but I wanted to do something that would give me a sense of accomplishment.  Mostly because I'd created yet another hideous garment.   (No.  You can't see it.  It's hideousness would burn the very eyes from your heads.  Really.  I'm thinking of calling in an exorcist next week.)  Anyway, my point is that I needed to do something that would result in an actual sense of achievement (instead of needing holy water and a priest).

I have been downright hoarding patterns.  I'll admit it.  I started sewing clothes about six or seven years ago and I have never, ever, no not ever once thrown away a pattern I've purchased.  Literally.  I have four or five patterns that I bought over 20 years ago in a mad fit of considering garment sewing and I even still had those.  (I recovered from the mad fit pretty quickly and went back to quilting until after the Evil Monkeys were born.)

But for the past two-three (even four) years I really haven't sewn much for myself.  And what I have sewn has been mostly from basic patterns or from my personal sloper.  The large bulk of the patterns in the hoard are either untouched or disasters.  Or both.

Because seriously.  Why did I buy these??? 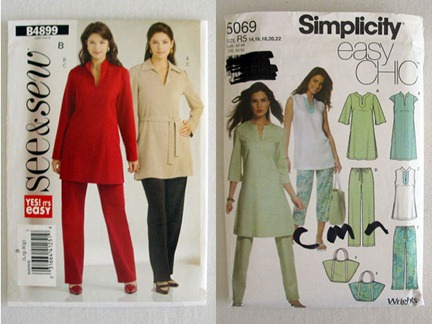 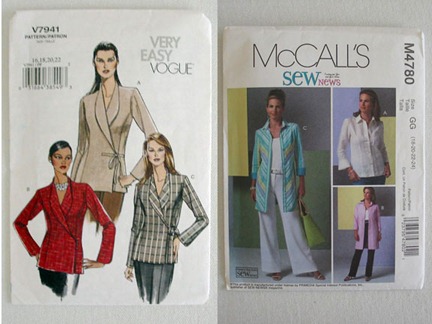 My only excuse has to be mental deficiency brought on by the lingering effects of multiple pregnancies.  Er... which is pretty much my excuse for anything that happened for the first six years of the Evil Monkeys' lives.  But now I've hit the magical Year Seven Return To Normal Hormones and really... there is just no rational excuse for owning these: 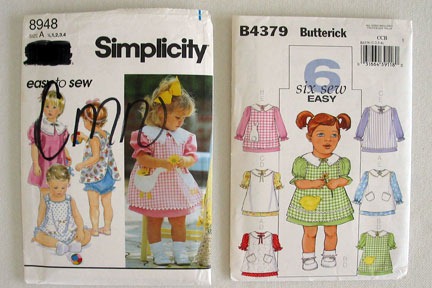 Yes.  Those are two different copies of the exact same pattern.  Apparently I didn’t think I could figure it out from the first one?  Clearly dark forces were at work here, people.

But I am brave!  The evil pattern demons can’t bring me down!   So I bucked up my courage, dove into the battle and dug through all the pattern boxes.  And ended up culling out 100 patterns.  Well, 97.  Whatever.  These are bundles of ten patterns each: 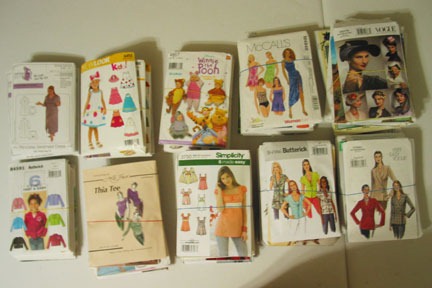 That's a lot of patterns, people.  I really didn't expect to get rid of that many.   But I've come to the conclusion that between my five years of BWOF back-issues and my current Ottobre subscription... I really don't need any other patterns.  Ottobre more than covers all my kids' sewing needs and Ottobre Woman really covers all of mine.  Ottobre is certainly easier to deal with and better designed than the Big4 generally are.  Plus, quite a few of these patterns are simply the wrong size range for me and there’s not really any point in holding on to those.  (I have no idea why I own so many patterns in size 20-28.  I currently cut a size 12-14. The mind boggles at what I might have been thinking.)

I did keep some patterns.  Mostly Big4 that are still in the Evil Monkeys' size ranges and any independents that might be useful or that I just enjoy owning.  I have a ridiculous collection of HotPatterns and vintage Folkwear, for instance.  Because I will persist in the delusion that I might have lost 45 pounds when I wake up tomorrow.

Well.  At least I achieved my sense of accomplishment for the week.