Filed under: BWOF / Burda Style, BWOF 6-2006-140
Ok, this would be have been a funnier title if you had had some sort of familiarity with our CD collection.

My husband used to be in the habit of buying compilation CDs. I really found this weird when we first met... in the US this wasn't a very common way to sell CDs (at least not to people who didn't spend all their time purchasing things from RonCo off the TV). However, in New Zealand (and based on the number of CDs my husband has from before NZ, apparently the UK too) they're everywhere. Lots and lots of compilation CDs.

So anyway, we have this series of CDs from New Zealand called "The Best (insert your type of music or song here).... EVER!" Trust me. This is something of a hyperbolic statement.

Saying that, this really is a cute ruffle-skirt. I've been eyeing it ever since it came out, which was over three years ago (this gives you some idea of the pace of my sewing strategy). 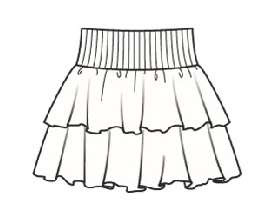 This is BWOF 6-2006 #140. The original pattern calls for a ribbing waistband and batiste ruffles. I decided to go with knit for the ruffles because TLo had two tiered knit summer skirts that she adored but outgrew. My devious plan was to replace the old skirts with something similar in order to ensure that she might actually wear the stupid things. So far, the plan has worked since she seems to really like these two skirts.

This was the first one, made with a heavy white interlock at the waistband (I didn't have any ribbing and couldn't be bothered to try to locate any) and a nice medium-weight interlock print for the tiers. 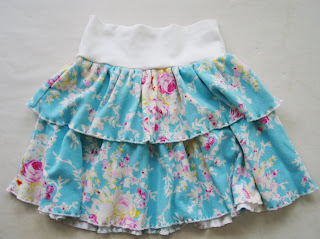 This really was as easy to sew as BWOF claimed in their little blurb. You cut a rectangle for the waistband, seam it into a tube, fold in half and viola, a waistband. You cut the ruffles as you would normally (i.e. curved strips in two widths), baste together at the top, attach the waist band and serge the whole thing together. You're done! Instant (almost) skirt! Oh, well you do need to finish the hems of the ruffles, which I did with a rolled lettuce hem on my serger. Very very quick to make. 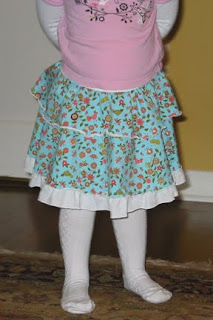 This one I added a little more detail, for a few reasons. First was that the fabric was somewhat similar in color to the first skirt. Second (and more importantly) was that I thought the first might be just a shade too short to last long. I had planned on just cutting the tiers a little longer. Except that the fabric I wanted to use only juuuuust fit the pattern as-is. Hmmm... what to do? I really wanted to use up that half-yard of fabric, since I purchased it three years ago to make a baby shirt... uh... for the now five-year-old.

Oh how I miss the days when a half-yard of fabric could make almost anything.

I didn't want to add any bulk to the main body of the skirt by adding an entire third layer of another fabric, becuse the teal knit was really beefy. In the end I decided to add another little ruffle layer to the hem of the bottom tier. To do this, I roll-hemmed a strip of seersucker fabric and gathered it to fit the length of the hem. The strip was measured to be about 1.5" below the hem of the knit ruffle and extend about 1" above the hem. That way I had enough room to attach the strip and still do a rolled hem on the knit ruffle. I used a cover-stitch to attach the strip so the raw seam was covered on the wrong side. 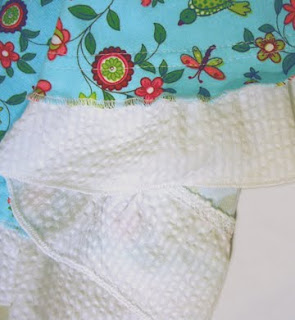 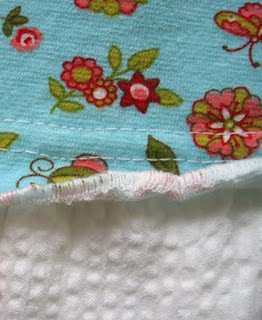 It came out pretty well, although this fabric tends to flip up where it's lettuce-edged. 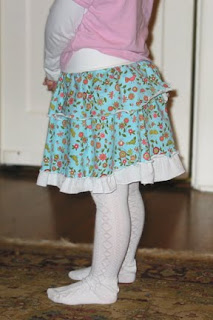 I don't mind since the wrong side is white and goes with the white hem strip and waistband. Or in any case, that's my story and I'm sticking to it.
Email ThisBlogThis!Share to TwitterShare to FacebookShare to Pinterest