I do.  This year we’re having a smallish Christmas with (as far as I know) just the immediate local family—which is to say myself, The Husband, The Evil Monkeys, The Parents and The Grandparents (the only two of my original six that remain).  We hold all such gatherings at The Parents’ house because, quite frankly, their house is a veritable mansion and mine, veritably, is not.

We’re having a very casual meal for Christmas Eve Dinner and I decided to bring some additional sides.  So I chose green bean casserole and ‘some type of bread product’.  I had originally intended to just make my standard (albeit tasty) whole-wheat loafs.  I even contemplated making lefse, inspired by Joy’s fabulous foray into the making of krumkake.  But then it occurred to me that I hadn’t made soda bread in a long time.  A really long time.  So long a time that I couldn’t remember the recipe.  And thereby discovered that I also couldn’t remember where I’d put the written version.

Doh!  And yet…. there’s a reason Google was put on this earth, right people?  Surely I could find a nice, simple, traditional soda bread recipe.  We just put “soda bread” into the search engine and….

I have never seen such a jumbled and confusing mess of useless links.  Maybe nobody makes real soda bread anymore.  Perhaps they’ve all been seduced by the siren-song of “honey-glaze” and “dried mangos”, which seemed to crop up disturbingly often in my search results. Perhaps we were doomed, doomed to eat plain old yeast-risen bread after all.   I despaired.

And then, I saw it.  A web address tantalizingly called www.sodabread.info.  Wow.  Seriously?  They have their own website?  This I had to see.  And I was not disappointed.  I now have proof that there is someone emphatically-to-the-point-of-bordering-on-maniacally endorsing literally every possible thing on the face of this planet.  So meet my latest discovery: The Society for the Preservation of Irish Soda Bread.

You heard me.  A flippin’ society, people.

Now I will say, they do have a point that some of these new-fangled ingredients (Sun-dried tomatoes?  Garlic? Chiles??) are not traditional.  Plus, they provide a seemingly exhaustive quantity of information about the history of soda bread.  I personally never in my life expected a soda bread to be desert, but apparently there are heretics out there who do.  And the Society does have a nice, simple, traditional soda bread recipe.  Which I fully intend to desecrate by –gasp– adding raisins.  And possibly a tablespoon of sugar.

Don’t let the SPISB know.  They’ll probably hunt me down and beat me with a ten-day-old loaf wrapped in a sock. 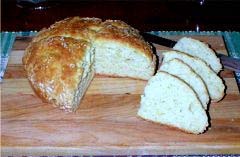 I’m so glad I didn’t decide to make lefse after all.  I shudder to think what a Society For The Preservation of Norwegian Lefse website would look like.  There’s only so much gastronomic zeal I can take in one year, however well-intended.  Plus, I’m too lazy to rice all those potatoes.