Trena very kindly pointed out that she was culprit... er, I mean, the interested blog reader looking for this tutorial on berets posted by the lovely Neighbourhood.gal.  Despite the beret trauma inflicted on me as a child, I have to admit that this is pretty dang cute.  It's a nice tutorial too, so hop on over and check it out if you're looking for beret patterns.

Whew.  Mystery solved.  Now I can sleep at night.

But that leaves me with the need to find something else to write about... oh dear.

Let's draw out the studio remodel a bit, shall we?

I did purchase two new storage cubes to facilitate the rearranging and creating of new storage space: 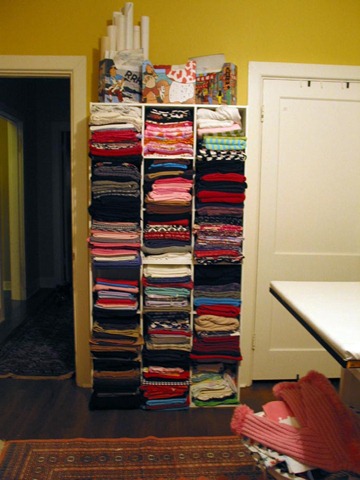 I wish I could say that this is all of my stash, but I have this much (or, um, maybe a bit more) in the closet.

The taller stack of cubes next to the closet doors are the new purchase, which went on sale at Lowe's on the very day I had my epiphany about remodeling.  I decided I needed two.  And when I got there, they only had two left.  Yay, verily.  It was a sign.  So, despite not really having the extra cash, I dug out my Christmas Visa gift card and  home I came with two spankin' new storage cubes.  This meant that I could remove the dreaded Fabric Cover on the old storage cube.

It had been a necessity because that corner gets some sun and the fabric was suffering.  But, like Mushy, I prefer to see my fabric out in the open (I mean, gazing adoringly at it is mostly the only reason I even own it in the first place).  So I moved the fabric to the (mostly) sunless wall and therefore had a whole big storage cube free for... uh... for… hmm..... for what exactly?   Good question.

I decided it was the perfect place for Notions.  And that's what's there now. 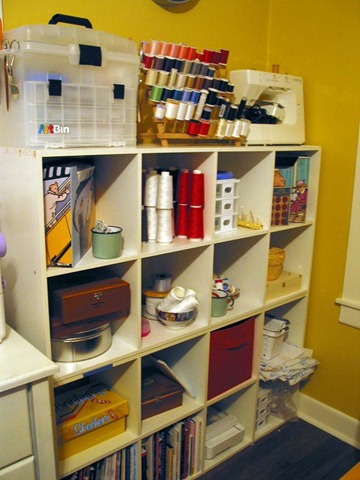 I'm still in the process of covering and labeling cigar boxes and collecting prettier containers and whatnot, but that will take some time because I don't have lots of funds right now to blow on totally unnecessary junk.  Plus, I want things I really like, not just whatever I find right then and there.

I’ve discovered that despite never seeming to have the tool or notion I need, I have a lot of notions and tools.  That ArtBin is full of stuff like scissors and marking tools and needles and such.  And all these boxes have stuff in them too.  Plus there are more things that I don’t use often in the closet.   Sheesh.

By the way, my walls aren’t fluorescent mustard yellow and I didn’t repaint the walls.  Our entire house is painted this color, which is actually quite a lovely shade of soft gold.  Being yellow, however, it reacts dramatically to lighting changes and also photographs unpredictably.  It’s roughly this color: 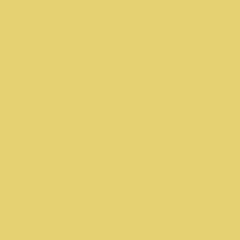 And yes, I did ban the Evil Monkeys from the studio Forever and Ever In Perpetuity Never To Return For As Long As-- um.  Right.  Well, I bought them a new industrial-strength (read "cheap-ass junk from Walmart") rug for their bedroom (so as to protect their existing cream-colored carpet) and did a storage-and-table-rearranging number on their room as well.  They have the biggest of the bedrooms by far and now have lots of room to play and draw and watch DVDs and listen to music and, uh, sleep and stuff.  It's pretty slick in there, if I do say so myself.  Plus, now all we have to do is shove some food in through the door every once in a while and they never have to come out.

Which would be fine if we could ever get them in there in the first place.