In Which A Crabby Old Man Is Lucky

Lucky I don’t beat him to a pulp, that is.

So.  In writing earlier this week about my grandmother, I was reminded of a photo of her that used to exist.  Note the use of italics.  Because, Gentle Readers, I have come to the sneaking suspicion that my miserable wretch of a grandfather has either lost or destroyed it.  Explaining why he might have done such a thing is too long and horrible a story to relate to such delicate ears as you Gentle Readers possess.  Let’s just agree that such a thing could and in all likelihood did occur.  Which explains why my rotten grandfather is lucky (yes, lucky!) he’s a feeble old man and even I am unlikely to pound on such a person.  Maybe.  He’s lucky my grandmother isn’t around to hear of it, because I’m pretty sure she wouldn’t have such scruples.

I bring this all up because I’d had the fleeting thought of sharing said photo with you.  It was truly fabulous.  I mentioned before that my grandmother was stylish.  She sure was.  The missing photo was taken sometime during the war.  It defies description, but those interested in vintage fashion would have loved it because it resembled nothing so much as a fashion plate.  Alas, that wretched excuse for a person called “Grandpa” has made the point moot.

All I have is this photocopied (photocopied) picture that was taken around the same time.  The image is so degraded that I can’t even tell for sure what type of material that hat is made out of.  Velvet and lambswool?  Fur?  The mind boggles.  I think that dress is a wool jersey.  Hard to know for sure and of course I never thought to ask when she was around to tell me.  I have no doubt that she would have remembered, in great detail. 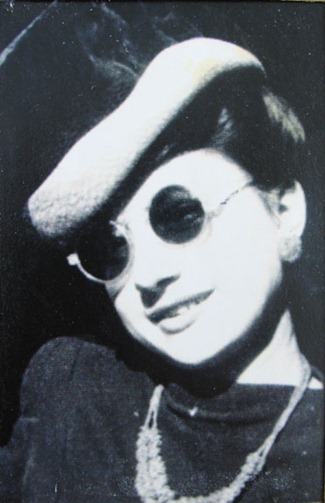 My recollection is that this was taken in 1939, which if true would  make my grandmother 16 years old and it’s roughly a year after the invasion of Austria.  If this is more recent then it’s from during the war or maybe even slightly after.   If I knew more about hats, I might be able to date the image better.  Either way, I find the fact that so many women managed to maintain their sense of style during a period of such intense uncertainty pretty mind-blowing.  Although if you knew my grandmother, it wouldn’t surprise you to hear that she managed to find a fur hat in the middle of an epic war.  Nor that she would insist on wearing it with such aplomb.  That is how she rolled.