I’ve made two tops that actually fit and started a jumper for TLo’s school uniform.  But I still can’t get my camera to work properly.  Although admittedly, I haven’t really been trying that hard…

Still.  Here’s how bored I am, since I don’t have anything to show you from the sewing room: 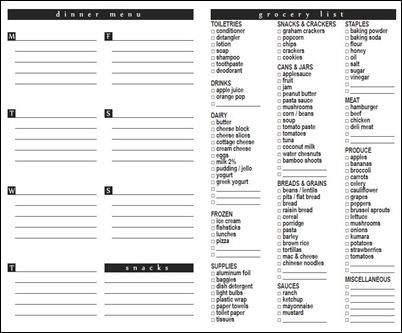 Yep.  I made a double-sided meal planner/grocery list.  I reformatted my meal-planning sheet and based the list part off an existing list I apparently got from MelanieMauer.com, although I have no idea what I was doing there in the first place.  Literally.  No idea.

Anyway, meals listed on one side, groceries needed on the other.  Most Frequently Purchased items on the list and then a few spaces for extras as needed.  Fold it in half and laminate.  Voila!  Dry-erase magical goodness for the grocery store.  Or in my case, I use a fine point Sharpie and just wipe it clean with rubbing alcohol when I get home.  That way it doesn’t smear all over you.  You know, while you’re shopping in the 112 degree heat.  That you’ve had for 73 consecutive days.  Yeah.  That heat.

Or you can print on both sides, cut it in half and have double-sided disposables.  I actually have both, dry-erase and in a pad.

Because I have padding compound at work.

So I make notepads.  Lots and lots of notepads.

Did I mention I was bored?

I was going to make a link to download the planner.  But of course, that would mean that you have to buy what I buy.   My co-workers seemed to think having bamboo shoots and coconut milk on my “frequently bought” list was weird.

I have no idea what those people eat.  We wouldn’t make it through the week without bamboo shoots and coconut milk.

Ok fine.   If you want a blank one you can download it here: The I’m-Bored-What’s-For-Dinner Planner.

But it’s not nearly as much fun if you have to write everything in yourself.