So.   I could burn your ears with the long, melodramatic (and blood-pressure raising) story of how we didn't get the cat we were told we could adopt from the animal shelter.  Instead I'll just say that I will have to think twice and then three or four times more before I ever donate money to those people again.  The sheer inefficiency of their operation leaves me to believe that my money would not be well spent.

However.  After several outraged phone calls from some very generous donors we know (which we did not ask them to make but on the other hand: ahhhh, it's good to know millionaires), we did manage to harass the shelter people into letting us adopt the sister of the cat they virtually snatched from my poor sobbing traumatized children's hands.

This was also a long and brutal process because apparently the shelter people don't believe in making notes.  Or speaking to each other in a professional capacity.   And so every time we talked to someone new they insisted that we could not, in fact, adopt that other cat.  Why, you ask?   I have no flippin' clue.  Every time, a new reason was proffered- none of which seemed reasonable.  We're "approved" to adopt an animal.  That cat is, coincidentally,  an animal.  The problem is....?  But every single person we spoke with was obstructive.  Resistant.  Un Helpful.  Do they want to put down these animals?  Are they secretly some sort of animal serial killers?  Do they, as KIDMD suggested, think we're going to eat the cat for dinner??

Ooops.  Sorry.  I said I wouldn't burn your ears.

Anyway, they finally upheld their promises and so today we have a new addition to the family. 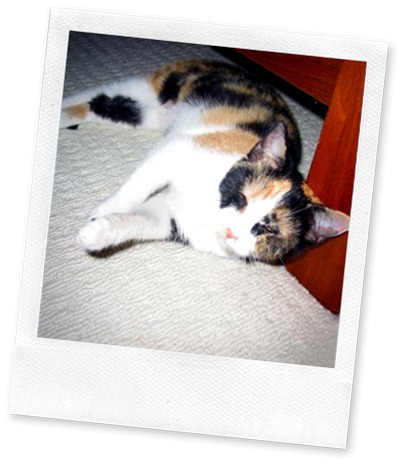 Meet Cricket.  The Other Sister.