In recent editions Ottobre has started adding a plus size and a slender size garment or two. I’ve never really had any need to deal with these before now because they’re offered in the girls’ sizes and not, for obvious reasons, in the toddler sizes that my kids both wore. But the kids have both inched their way up into the girls’ section (in one way or another) and now TLo fits (in theory) a size 104D with some added length and the Big One fits (also theoretically) a size 116B (with a bit of spare room in the hip). So now I’m on a mission to try out as many patterns in the “special” sizes as I can to see how it goes. 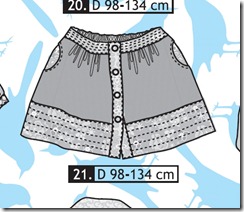 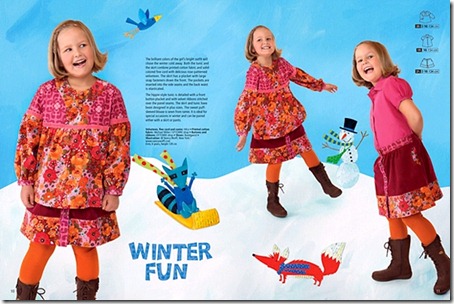 To start me off, I decided to make TLo one of the plus sized skirts from the 6-2009 issue. Unfortunately I didn’t actually measure her before I did this and ended up making it a size too big. Which precipitated a whole cascade-effect of measurement and sizing trauma that I’m still trying to recover from. I’ve just realized that I will have to add or subtract almost THREE inches in width from each of the girls’ “regular” patterns respectively, which is way more tracing and altering work than I really wanted to do. Special sizing is looking better and better. 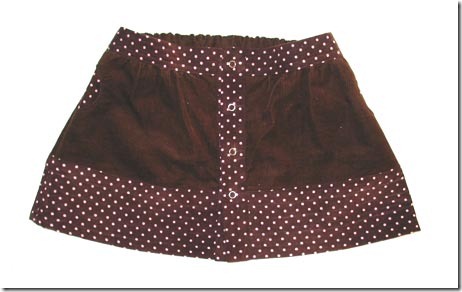 Anyway, this is made from brown babywale corduroy. It was from Hobby Lobby and I’ve used it before so I know it won’t hold up well in the wash. It’s moderately cute though. The dots are pale pink, if you’re wondering. 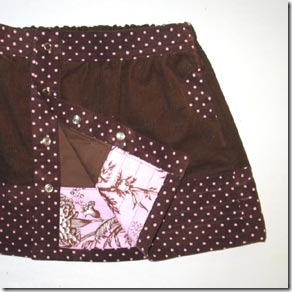 And let me ask you: Doesn’t that skirt in the photo look like it’s hitting that kid at the knee? Because I made a size up from TLo’s height (which I’ve just newly established, with measuring tape and everything). But it’s way shorter on TLo.

One nice thing about this skirt is that the inside is almost completely finished and looks pretty nice. Which is a good thing since it’s so very short and really flips up when TLo wears it. Still. I tried a D size pattern. On to the B sizes.