In Which I Brag Shamelessly.

I finally broke down and bought some new jeans.  My grand plan of wearing only skirts (based simply on the fact that I outright refuse to make my own jeans) has not gone well.  I have one almost-finished skirt based on my super-duper fitting muslin.  And that's it.  But my old jeans are not only old and worn out, they're also way too big.  They look schlumpy.   Even for me.

So I went to the mall -shudder- and checked out the jeans sale that a friend at work was hyping.  And I found a pair of Levi's and a pair of low-rise Lee's.

But wait.  Here's the kicker.  These jeans were not in the "women's" department.  They were in the "regular people" department.  Granted, they're size 16 so we're talking the very top of the regular world, but still... that's like three whole sizes down from my previous jeans (which were size 18W)!  No wait.  That's four sizes. Whoo HOO!   I AM SO PSYCHED.  Ok fine, my 18W's were loose to begin with, but not my 16W's. That's still three sizes, people. 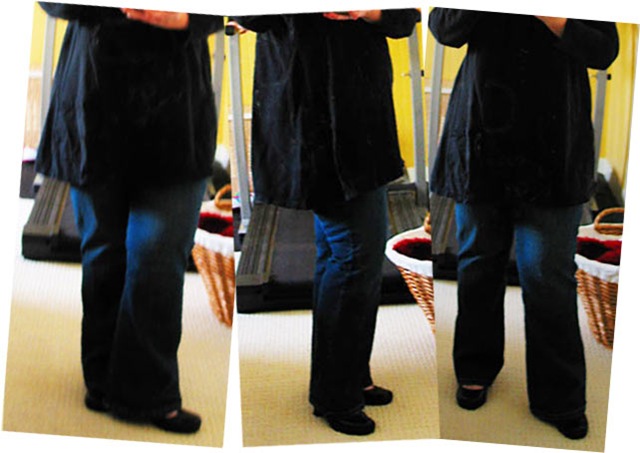 (And if, Gentle Readers, you are now looking at my weight-loss slider bar and shaking your heads in disbelief, muttering, "No flippin' way did she go down four sizes on eight pounds!"... well, I have an explanation.  Remember way back when, when I said it was a long story why that thing hadn't moved?  Here's the long story.  About a week after I set up that slider, I realized that my scale was having some serious issues.  As in, one day it told me I'd gained three pounds.  The next day, it decided I'd lost 65.  Now, as much as that is a dream come true for many of us, I'm willing to recognize that I'm only going to lose 65 pounds overnight if it involves having a limb or two amputated.  So I decided to put that scale out of it's misery and bought a new one.  Unfortunately, the new scale was pretty persistent in declaring my weight to be seven pounds more than the old scale thought it was.  Much like my doctor's scale insists.  I finally decided that since the scales were clearly in cahoots, I'd just go with the "new" weight, which meant that in order to move that slider I had to go back and lose a whole new seven pounds before I could even make any progress.  Rather than change the slider setup I figured it would be, you know, "good for me" to just tough it out.  Character building.  And look!!  Four whole friggin’ sizes, people.  Go Beangirl, it's your birthday.  Go Beangirl, it’s a party.)

My only question now is: Does this mean I'm not a woman anymore?

EDIT: here’s the size chart from Lee, which is the other brand of jeans I bought.  To answer a question, typically “women’s” sizes in jeans continue on where “regular” sizes end, but due to (presumably) vanity sizing, they don’t go up from the regular size 18 (the last size) and on to just plain 20.  Instead, they start over at 16W (which would be the same as a 20) and then 18W, etc.  You could argue based on this chart that 18 and 16W are pretty similar in size (and in some brands I think they’re probably identical).

This sizing seems accurate to me in that my starting measurements were waist 39” and hip 49”, which corresponds exactly to their size 18W and that’s what I used to wear.  The new jeans I bought are the size 16 under the misses chart.

I defy you find a sizing chart on the Levi’s website.  It’s unintelligible! 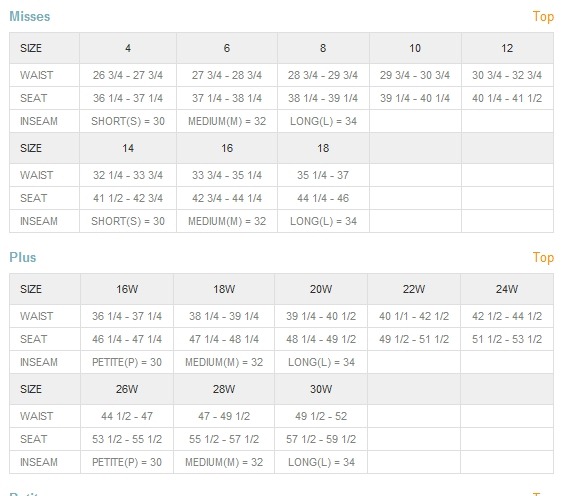