In Which I Make Some T-shirts. Woo. Hoo.

Ok, so I can not think of one single solitary thing to write about that is remotely entertaining. I am… bored. Bored with sewing, bored with writing, bored with… everything. The long bleak insignificance of it all looms up across the never ending darkness…

OK, so I’m not in the greatest of moods today. I am in a state of general irritation. This is probably due to several things, like Christmas (yuck), winter darkness (yuck yuck) and the fact that this house makes my feet perpetually cold (yuck yuck brrrr). It’s also almost certainly due to the fact that yesterday was the fifth, the FIFTH time I have taken a day off only to have my dear darling beloved husband be home all day too. If he is home the next time I take a day off he is very likely to become my late beloved husband. Seriously. I’m only 41. I’m sure I can get remarried. Widows are appealing. People feel sorry for them and set them up with handsome widowers. No really. They do.

The last time I was completely alone for more than 90 minutes was over two years ago. I kid you not.

So on my last day off of the year I got virtually nothing accomplished (hence my general state of irritation). The only thing I finished were two of the long-sleeve t-shirts that I had already cut out for TLo. Here they are: 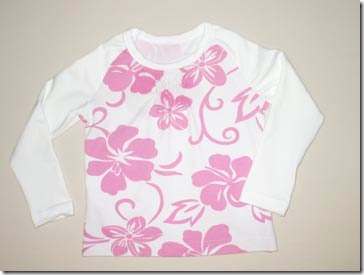 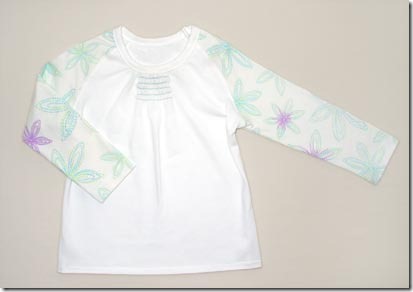 I used Ottobre 6-2008-20, which is the shirt version of the Bubble Dress I made earlier this week. 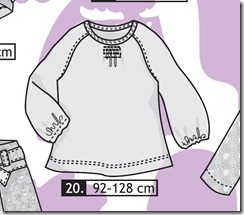 This shirt comes with or without the shirred front panel, but I decided that if I was going to convince TLo to wear it I would have to add something “fancy” or there was just no hope. I also made a change to the sleeves. The original has a gathered bell-shaped sleeve, but I want The Big One to be able to wear these next year which means right now the sleeves are too long for TLo and she has to be able to roll them up.

Instead of the bell sleeve pattern I overlaid the sleeve from Ottobre 1-2009-18, which has a narrow straight sleeve. Fortunately, the two sleeves must have been drafted from the same block because despite one being a raglan and the other a set-in sleeve, the slope of the cap is identical. I just overlaid the raglan part and folded under the bell part to make one straight raglan sleeve. I pinned them together and cut the fabric that way. That picture is especially ugly but you can see the line-up of the two caps. I could have just drafted a straight portion to the existing sleeve but this was easier since I’m making the Ottobre 1-2009-18 this week too. I already had both these sleeve patterns traced and cut out, so by overlaying them I avoided having to trace another one. I’m just that lazy. It took me roughly triple the time to type out this description as it did for me to overlay the patterns and cut the sleeves.

The shirt is a little snug on TLo but that was my intention since sometimes she’ll be wearing these under her short-sleeved tunics. 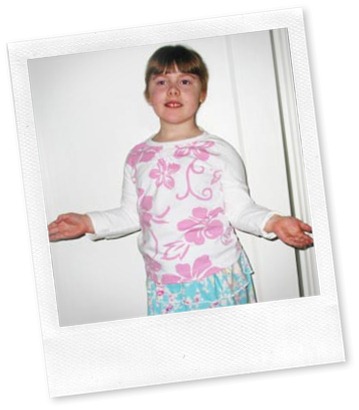 So there you go.

(And that, gentle readers, was a “Fargo” reference. Now we know I’m crabby because I almost never quote “Fargo” unless I’m grumpy. “That there is what you’d call a ‘defensive wound’.” See? Crabby. Of course, this makes more sense when you can hear my lovely Minnesota accent. You’ll just have to imagine.)