Uniforms. They're just so... the same.

Uniforms. They're just so... the same.

So today my husband was herding the girls towards getting ready to go to school. This is always a frustrating and shouting-laden time and TLo in particular has taken it into her head that she Does Not Wear Sweaters. Actually, this isn't really a new thing. Even as an infant she would fuss if I put a sweater on her. Long sleeve shirt? No problem. Swaddle in a blanket? Easy. Add a sweater or jacket? All hell broke loose. Which was highly annoying since she was born in winter and we didn't have any central heating in our house (and just don't get me started on the whole "we don't need central heating in New Zealand because we're icicle people who can not feel the cold" thing). TLo. She started out annoying, she'll probably end annoying. Good thing we love her.

Anyway, the girls were being herded (rather unsuccessfully) towards getting ready to go to school. Despite the fact that I verbally told TLo and The Big One and my husband that The Big One's new school jacket was on the couch, my husband managed to stomp around for five minutes mumbling about not finding her pink sweater.

"Which pink sweater?" I ask.

"Her pink one," he grumbles.

"But I gave her the pink one, I don't understand which sweater you're looking for," I respond.

"The pink one," he mutters.

"They have about five pink sweaters," I reply. "That's not a helpful description."

"You know, the PINK one," he growls as he wanders into their bedroom.

"The pink one with the grey diamonds on it!" he snarls.

"But she can't wear that to school! They have to wear a solid colored sweater, it's part of their uniform."

It is at this point, gentle readers, that my husband is lucky I was late for work or possibly he wouldn't be my husband any more. Because it was at this point that he expressed complete disbelief and astonishment that the school does, in fact, have a sweater component to their uniform policy. The fact that I have explained this to him verbally and (I think) in writing is apparently not sufficient. The fact that I spent the past three weekends saying "I really really really have to make the girls some more solid-colored sweaters so they can wear them to school as per the uniform policy that I explained to you three months ago when school started" apparently did not penetrate my husband's consciousness at all. Nor did the fact that last weekend I spent much valuable time cursing, at volume, the inventor of Minky Fleece whilst making a new solid pink jacket that was way too small for me to wear and so could only reasonably be assumed to belong to the children, all while my husband was seated about four feet away from said voluble-cursing-and pink-jacket-making.

So off stomped my husband to find the missing jacket. And after all that drama, TLo had decided to wear it instead. The Big One was already wearing the green jacket I made last winter.

Seriously, if I don't need to be hospitalized in the next year I will be completely astounded.

So here is the new pink jacket that I made for The Big One. 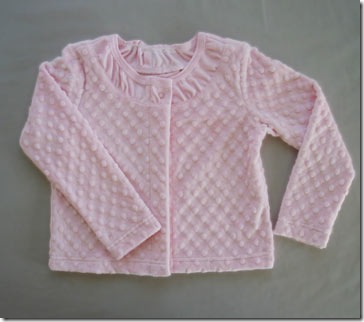 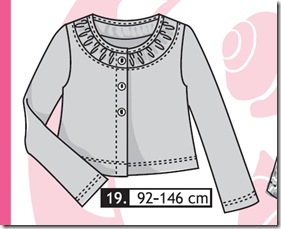 I used Ottobre 3-2009-19, a pattern I've been eager to try since it came out even though I suspected (and was totally vindicated in believing) that the gathered yoke would be a disaster. I seem to have trouble with Ottobre patterns that require a gathered neckline to be held in place by stay-tape before applying a binding that is cut to a specific size. That particular sequence of events has never gone well for me and this case was no different. However, I managed to cheat (rather ingeniously, if I do say so myself) and re-gather the stretched-out back neckline by inserted some elastic ruching thread into the binding after it was sewn. It looks a little puckery on the table, but when it's worn you can't really see the extra gathering. Plus at this point, do I care? Exactly. 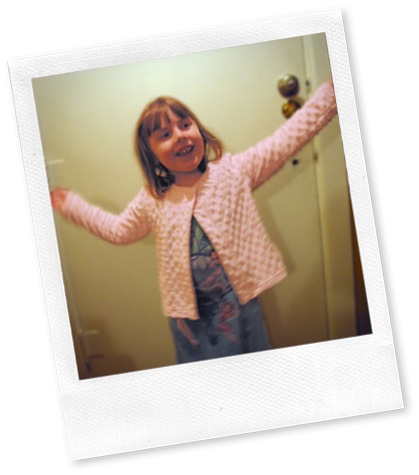