OK, I think this child needs therapy of some sort.  When asked to pose for a picture of her uniform this morning, this is what she came up with:

Seriously?  It looks like those Victorian death portraits.  Yay.  That’s exactly what I was going for.

This is a great skirt, which I've made twice so far and plan to make several more times in larger sizes for TLo.  (Yes, it is very confusing that the Big One wears smaller sizes than the Little One- or at least this seems to completely baffle my husband.  The Little One could, technically, be called The Wide One.  But that's just mean.  Plus we're really trying to avoid actively instilling eating disorders in our kids-- unlike several of The Big One's first-grade schoolmates, who shall remain anonymous, and oh man don't even get me started on that one.)

This is BWOF 10-2006-140.  For some reason the new skirt from BWOF 12-2009 (as shown by Angie A. on her blog today) reminded me of this skirt.  In fact, they're not really all that similar, but I like the flippy skirt idea as a general concept.  It's particularly nice for more tailored school uniform looks.  I find the oversized A-line jumpers get a little boring after a while.

Anyway, I made this in a navy twill and a khaki twill as per the Great Uniform SWAP rules.  Both are Docker remnants from someplace or other (can't remember where exactly, might be Fabric Mart, might be someplace else).

The only real change I made to the pattern was to add buttonhole elastic to the waistband.    Or at least, I think that was a change.  Anyway, it’s a change that I usually make if it’s not already included in the pattern.  I am a devout believer in Buttonhole Elastic.

Because The Big One is so slender at the waist and basically has no butt (she gets that from her dad), I have to pull in the waistline quite a bit or else her skirt falls off. 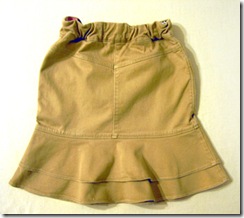 I think in this picture you can still see how nice a hip curve it has though. 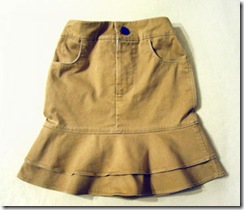 This style must have been really popular in Germany in 2006.  In 2007 I met no fewer than 5 German women who pretty much had this exact skirt in denim.  I can see why they liked it, it's pretty darn cute. 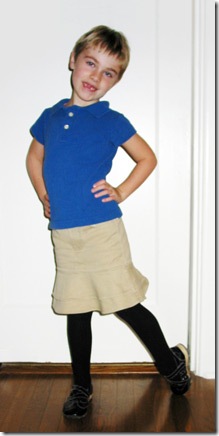 This was the best pose I could get out of The Big One.  Plus, she’s looking particularly lovely with her giant missing-tooth gap and her hair uncombed.   I’m such a good mom to post these photos for everyone in the world to see.  I’ll be sure to save them to show her prom date too.