I started out today planning on a most innocuous post.  I thought I would just post up this spread from a recent Little Red Book (JCPenny) that was at my mom's house (my mom is the recipient of literally the largest collection of mail-order catalogs in the entire known universe).  I thought that all my little friends who like vintage might like to see this, if they hadn't been so lucky as to receive one at their own homes.  It's an interestingly commercial take on vintage. 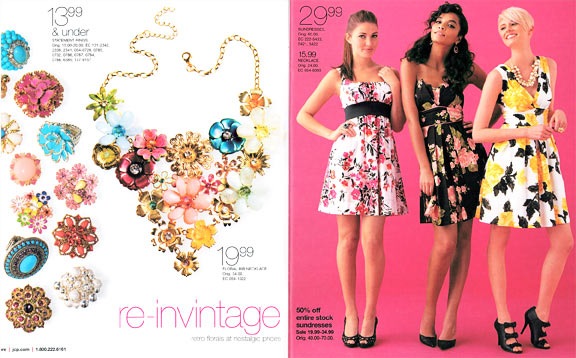 As it happens, I had this catalog open on my desk when a co-worker walked by and decided to take a look.  "That's so cute!" she exclaimed. "You know.  Without the hooker shoes."

This forced me to confront a topic that has been on my (and many other people's) mind lately: "appropriate" clothing.

I will say right off the top that I am not what I would consider to be a socially conservative person.  I have always considered myself to be at the very least a social moderate, if not a liberal (I'm talking about my social position, as opposed to my political one, which we won't discuss here).  As a result, I am generally of the opinion that people should be allowed (and in this country have some very specific legal rights) to express themselves as they see fit, regardless of whether I agree or disagree with that expression.  I just wanted to say this before I continued on, in case anyone was under the impression that I think people should dress how I expect them to, simply because I expect it.  I do not.  And, to be just completely clear, I am very much not prudish when it comes to people's sexuality.  On the other hand, I think boundaries amongst total strangers are important.  (So of course I'm having a nice little rant about a highly divisive and emotional topic on my sewing blog.)

So for the record, I am not a prude.  On the other hand, you have the overwhelming prevalence of the Hooker Shoes.  This spring I have been totally unable to find a decent pair of sandals I can wear to work, in part because it seems like anything that has a closed back or strap at the heel (vital for work) is, essentially, a Hooker Shoe.  Which I find repellent.  And finally, getting to my point (ha! you're still reading?) this has caused me lately to ponder the concept of the mainstreaming of sexualized clothing throughout history.

More specifically: it seems as though people are frequently impressing on me that throughout history, the sexually explicit nature of clothing changes as a new generation begins to adopt what was once considered "immoral" clothing into everyday wear.

As an example: when the change from floor length to knee length dresses happened during the first quarter of the 20th century, we are often told that older people complained that this mode of dress was "immoral" because (one is led to assume) it was sexually explicit.  One is generally then led to look derisively at those foolish old people who would consider a bare leg to be anything other than a bare leg.  They are at best just haplessly old-fashioned and behind-the-times and at worst oppressive.

The logical conclusion to this mocking attitude is that anyone who feels that current clothing is too sexual clearly is just "behind-the-times" and "old-fashioned" or in some way oppressive.  For the past year or more I've been thinking that I'm just getting old because I think women wearing skintight miniskirts and bondage shoes are making a sexual statement, rather than merely a fashion statement.  (I think part of my problem is the highly submissive nature of bondage shoes, as opposed to the merely sexual nature of other types of clothing.  I'm still unconvinced that a deep-plunge halter top is appropriate office-wear for my physician's receptionist, but I could at least say that it's not advocating the submission of women as sexual playthings.  Possibly.)

To be honest, I'm still not totally convinced one way or the other.  Since I wasn't actually alive in 1925, I can't really verify (without some significant research that I do not have the time to make) that young people perceived their clothing as merely fashion and not as a form of sexual language.  On the other hand, I can't for sure say that about young people now either.  Is current clothing, for instance the ubiquitous Hooker Bondage Shoe, merely about fashion or is it intended to be a statement about overt sexuality?  And even more perplexing, is this a good or bad thing?  As the mother of two young girls, I'm inclined to think extreme sexuality in clothing (particularly of the objectifying/submissive kind) isn't such a great thing, but...?   On the other hand, I wouldn’t advocate sexual repression under any circumstances.  Which leads to?  Confusion.

So.  Modern clothes.  Too sexy or just plain cute?  Discuss.

(Don't you just love it when perfectly polite blogs suddenly veer explosively off-tangent like an elephant on ketamine?  Sure you do.)

edit: I will admit that the shoes in that photo do not make a particularly strong statement.  These do a little more and if I had more time I’m sure I could find some really crazy weird shoes.   I saw a woman wearing the second pair, or something very similar, last Sunday.  She was pretty clearly dressed for church.  I had to wonder how the rest of her congregation felt about her footwear, except that it’s very clearly the norm around here. 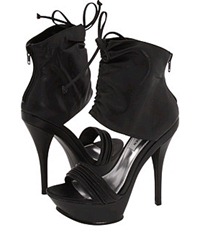 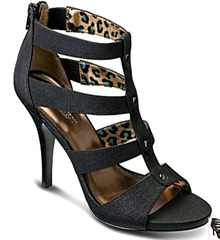