So The Evil Monkeys apparently take after their mother.  They have really little ears.

Well, for one thing, I can’t get “regular” earbuds into my bitty little ears.  You can imagine that there’s no way in H-E-double-hockey-sticks they’re going in the Monkey Ears.  We have six (count them six) useless pairs of "regular" earbuds that came with various iDevices.  But no, I have to buy the in-your-ears kind with the interchangeable large-medium-small gel inserts.  And I use the small.  And sometimes they still fall out.

The Evil Monkeys, until this point, have been stuck with the traditional over-your-head headphones, which are bulky, break easily, have to be bought special in a size that will fit tiny monkey heads (at three times the normal price) and are generally a pain in the B-U-T-T.

This week they were selling earbuds with interchangeable gel inserts in the checkout line at Walgreens.  For $5.  "Aha!" I crowed. "Evil Monkey Special."

Yep.  I am that mom.  I buy my kids cheap C-R-A-P from the check out line at Walgreens.

After much groaning and cringing and flinching and general whining, The Evil Monkeys have finally figured out how to put in their very own earbuds (I never said they were the sharpest tacks in the box).  Goodbye yucky over-your-head headphones.  Hello.... totally lost iPods.

It hadn't occurred to me, but the giant over-your-head headphones were pretty much the only thing keeping their itty bitty teeny tiny Shuffles from getting lost all over the house.  Plus, earbuds are sort of a pain to haul around loose, because there's just nothing to them and they’re floppy and whatnot.

My point being, I can't win.

I have no idea who this freak of nature is, but he seems to be a little bit of awesome.  He made his own collapsible knitting needles, people.  Why?  Who the flip knows!?  But he did it.  It's geektastic.

He also made a little template (after several trial-and-error efforts) of an earbud winder to be cut from an old credit card.  Now, I totally have a plastic winder that I bought online (with money, people) but I'm not going to go so far as to buy two more for The Monkeys.  Unless there are some in the checkout line at Walgreens.  Which there aren't.  I looked.

What I did do was print some nice little Hiroshige images on the laser printer, laminate them with some high-gloss laminate, mount them to some illustration board (front and back), and cut them out.  (Well, I also modified the design first because the holes were too big for our particular type of earbuds.) 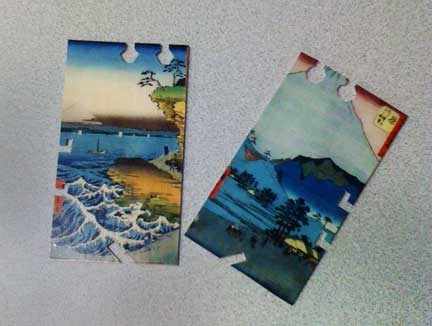 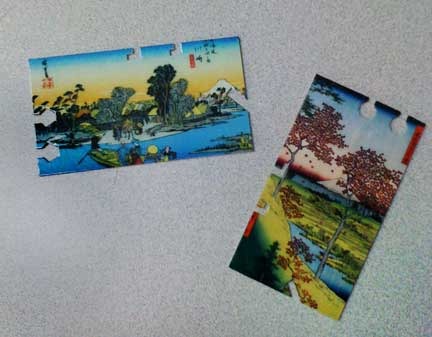 Here’s one with my iPhone tether.  I don't have any earbuds here to try it out to be sure it will actually work.  But I figure it's an hour of otherwise-useless work time well spent. 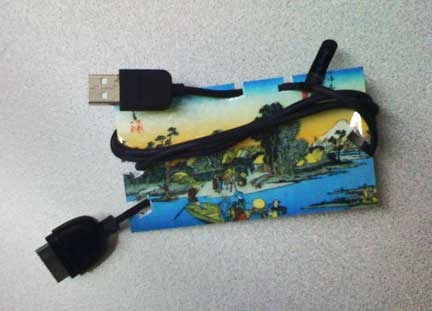 What?   I have commercial lamination and mounting equipment, people.  I have to do something with it.

These are AWESOME.  They work great.  I suspect that A) they won’t hold up forever, being basically paper and B) one or both will get lost within the next 24 hours.   But they work really well.  It would be worth investigating a more durable solution. 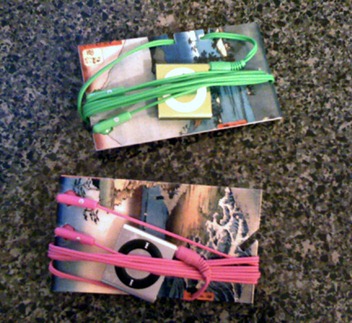 Sorry for all the bad photos, I used my iPhone.