Filed under: musical rambling
I have absolutely nothing interesting to say about this.

Fortunately, it pretty much speaks for itself.  Because I’m too tired from all the tryptophan to really do anything.  Other than loll around and listen to music from the 70’s.

Which frankly is pretty much what I do all day anyway.

On the upside, I just bought a whole Roxy Music album that we apparently didn’t own.

I know.  The horror.  I really have no idea how we survived this long without it.

Filed under: Ottobre 4-2008 #10, Ottobre Design
In 1889 the Northern-Pacific railway company proposed the building of a trestle bridge to span the Tacoma Narrows.  They didn't get one.   However, in 1940 the world's third-longest suspension bridge was opened spanning the Tacoma Narrows.  It was an engineering marvel.

The moral of this story?  Sometimes a good plan just doesn't end well.
The entire third grade is generously being treated with a field trip next week. They're all going to the annual production of The Nutcracker and to lunch at Texas Roadhouse.  The permission slip instructs that they should wear "holiday dress clothes" or "good everyday clothes".
Apparently all the boys wanted to wear tuxedos.   They were vetoed.
The Big One doesn't really have anything fancy to wear, because she has a bad mother.  So her bad mother, in a fit of rare guilt, agreed to make her a dress out of The Big One's most favorite fabric ever: polyester black stretch panné velvet.
The Big One is, in fact, the reincarnation of Stevie Nicks.  If Stevie Nicks is dead.  Is Stevie Nicks still alive?
Anyway, this was the plan: 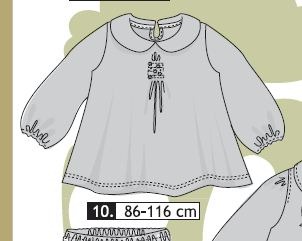 This is what she got: 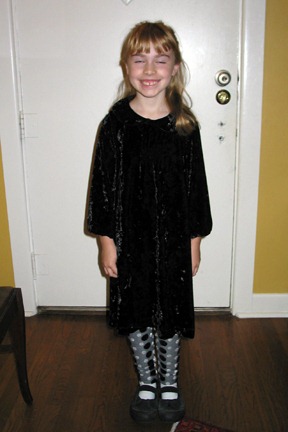 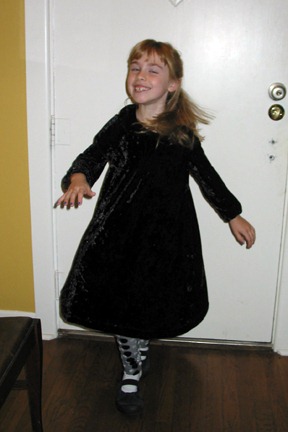 And of course, this is now The Big One's most favorite dress ever.  She wore it to school today for "free dress day".  She was desperate to know if I could get it washed by Thursday so she can wear it again for Thanksgiving.  She'll probably wear it every weekend for the next six months.
It looks like a bad cassock.
I have total and complete sympathy with the engineers of the Tacoma Narrows bridge.

You know what I love about neutrinos?

I like them because they make this pretty pattern. 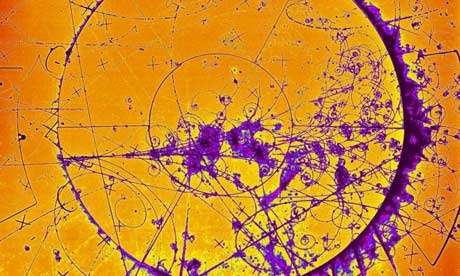 I am all about the pretty patterns.

The Fabric Hog. No, I’m Not Talking About Myself. Sheesh.

I made TLo two more dress/top/tunic thingies.  For once I was rather clever in my planning (and by "planning" I mean I actually thought about what I was going to do for more than five seconds before I started doing it).  TLo really needs some winter "weekend" clothes, but she could use a few warmer school uniform items as well so... I cleverly decided to make the first tunic in a solid knit, with the theory that she could both wear it to school and on the weekend and if it fit I could use a more interesting knit for other versions.

I know.  Shocking concept.  I like to think outside the box like that.  I am a rebel.

I was so excited to be making weekend clothes that doubled as school clothes that I got all giddy and didn't really think about how that would effect my fabric usage.  I’ve really been wanting to make the girls some weekend knit clothes because I have heaps of end-bits and odd-pieces of knits in bright florals and stripes and such that I am desperate to get out of the sewing room (so as to facilitate the guilt-free purchasing of new knits, of course... I'm willing to admit that my motives aren't in any way selfless).

I had to pick through all the many many many cute knit patterns I have (curse you, Ottobre Design!).  And so of course I chose this pattern because I thought it would be flattering on TLo... which it is.  It’s the right proportion in the body, the right length of skirt and the extra-wide collar lets her wear a turtleneck despite her no-neck situation (sadly, she takes after her mother in this). 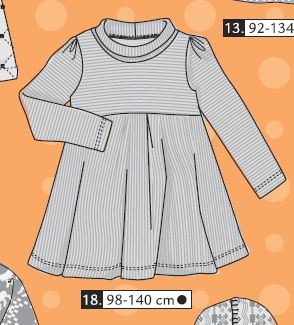 All good so far.   Famous last words because, Lo!  Due to  the shape of the skirt, in size 122 length/146 width the pattern takes one-and-a-half yards of knit.  With a lot of waste. Of all those piles of odd-ball knits, I hardly had anything that was long enough for this.  Instead of using up half-yards and odd bits, I ended up creating even more. 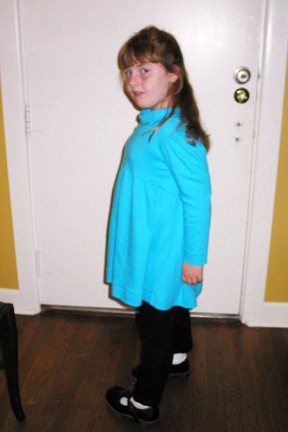 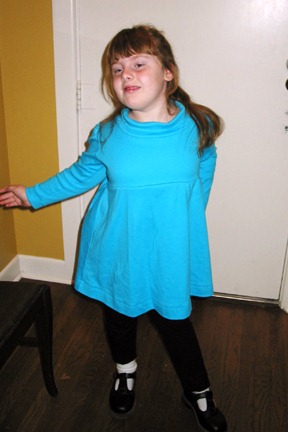 And here she is doing… the merengue!  Ole! 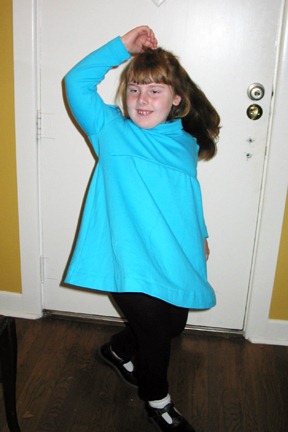 I made a cute second version in a black mini-floral knit with a slightly less-puffy sleeve, but I didn't get a photo of it yet.   They're both a little big in the shoulder, but I figure that's better than too small.  In person this is very cute on TLo, so we're going with a "win" on this one.  Despite the fabric-hogginess of it all.

Because I’ll probably have to buy some more solid knits in longer lengths.

You know.  To make a few more versions for school.

13 comments:
Email ThisBlogThis!Share to TwitterShare to FacebookShare to Pinterest

This Is Not The Handbag You Are Looking For… 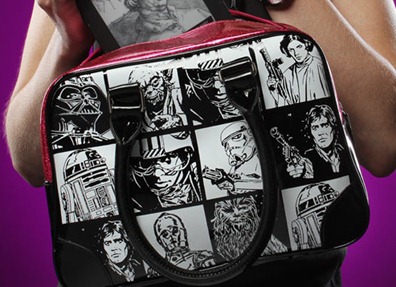 Since Angie A. Beat Me To It…

…and already snagged AC/DC, I’m going with “Shake Rattle And Roll”.  I always did have sort of a soft spot for that psychotic pedophile anyway.  No wait.  That was Jerry Lee Lewis.

This is an awesome clip, apparently from a Mexican movie.  Check out the clothes, Daddy-O!

Last night we had a 5.6 earthquake, apparently centered directly between me and Angie A.    The house was a-rockin’ people. (Oooo, could have gone with Stevie Ray Vaughn on that one too…)

Angie agrees that it was probably caused by my blasphemously trash-talking Daniel Craig earlier that evening.

Fine.  She hasn’t agreed with me on that yet.  But I’m confident she will.

Just in case, I take back all the mean things I said about Daniel Craig and I promise to never, ever think bad thoughts about him again.

Some bad thoughts, of a certain sort, might slip through.

I made TLo a couple of skirts last week.  I used a pattern I've used at least three or four times in the past four years or so. 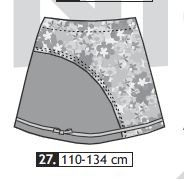 You'd think, wouldn't you, that if I've made this skirt at least four or five times that I'd have something interesting to say about it... right?  Something enlightening or dramatic or at least just witty.

I'm having trouble coming up with anything.

So here's what I have to say about this skirt: I made this in about 2 hours.  Including tracing.  Which means a normal person (like you... yes, you!) could make this in about... 25 minutes.

Here's the school-appropriate version I made first: 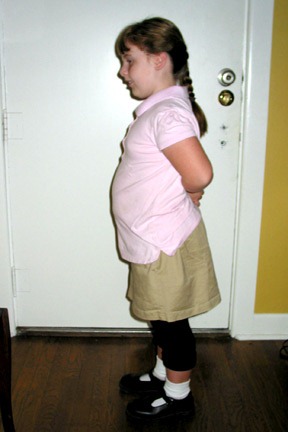 Here's the weekend-appropriate version I made next: 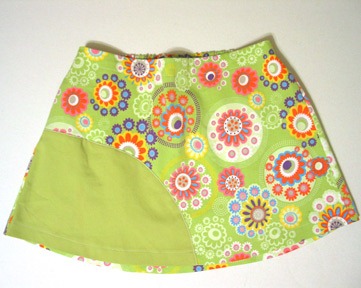 It’s green and green-and-floral twill.   I forgot to sew ribbon around the bottom of this one (which I had to skip on the first one anyway because I simply couldn't find any that matched... er... in my closet.  That was about as much effort as I wanted to put into that.)  I'll maybe get some ribbon this weekend and add it around the hemline, it's a nice little detail.

This is what a zombie baby looks like after a night of wild binging on Halloween candy. 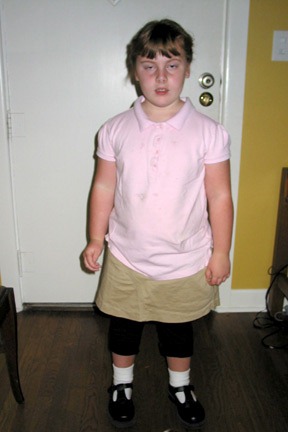 I tried to get a picture of the other one, but when I turned the light on she hissed and flung her arms over her arms and ran skulking into the closet to hide.  Awesome.