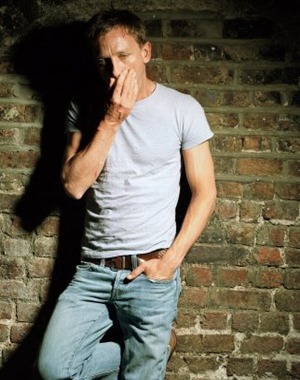 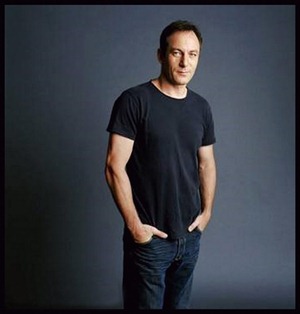 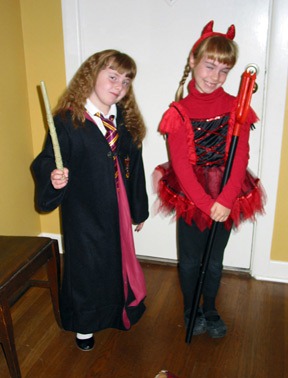 -sigh-  Sadly, I feel this might be the story of my life. The generating of random useless pieces of entertainment is my contribution to the world.

Jonas Salk I am not.

Saying that, I have now heard three or four interesting stories about meeting super-hot celebrities-- some random and fleeting, some... not so random or fleeting.  This is pretty cool (for me).  But... useful?  Contributing to the Greater Good?  Hmmm.

To make myself feel better, I'm posting up pictures of the latest addition to TLo's school uniform. 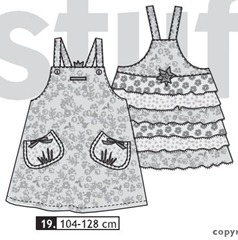 Ottobre 1-2007 #19.  I made this in Angelina Ballerina fabric for The Big One when she was four.  It was keeeyute-cute. It suddenly sprang back to mind this past week as a more interesting option than a plain A-line jumper.  I had to grade it up in width, as TLo is now a 116/122 in length but a 134/146 in width and this pattern only goes up to 128.  Still that wasn't very tricky, I just added some width to everything down the center front and back based on the difference between the body measurements for a 128 and a 146.  Easy-peasy.

No, the big problem was the ruffles.  This pattern calls for a full back in fashion fabric and then attaching the ruffles to that.  Which when I made it in light-weight cotton wasn't a problem.  However, not so good when using bottom-weight twill.  I was worried the dress would weigh forty pounds and possibly I'd get a phone call from school saying my child was stuck on her back like an overturned turtle, arms and legs waving frantically in the air because of her ridiculously overbalanced dress.  I had visions of all the other kids solemnly stepping over her on the playground or a swarm of crazed seven-year-olds howling in panic about "that kid who's stuck on her back under the jungle gym".

Obviously the solution was to make the ruffles in something light-weight.  Except it had to match the base fabric exactly, lest I get a nasty phone call from the school informing me my child's uniform was not uniform.  (OK fine, I've never once received such a call but still... I don't want to chance it.)

Here’s an over-exposed image to show you the ruffles better: 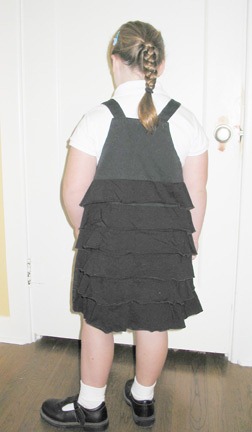 Despite the fact that I didn't think red-headed TLo would really rock a black dress, blacks are slightly easier to match.  I finally managed to match up a black twill with a black knit close enough to get by.  In the photos it looks like the knit is much darker, but that's a trick of the lighting.  It's not nearly so noticeable in person. 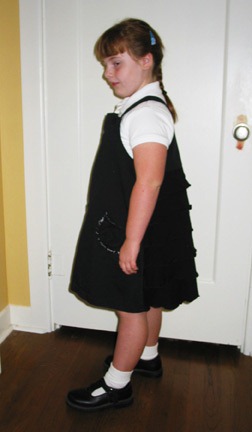 I also used a black-and-white cotton print to do the pockets and the little decorative bar on the front of the bodice.  Despite the above avowal of trying to avoid a distraught phone call from school about non-uniform uniforms, I feel compelled to include a small detail of pattern or color in these dumb things. One note if you're going to make this yourself, something I realized the last time I made this and forgot about this time: the straps are crazy long.  I put TLo's buttons about 4-5 inches up the length of the straps and they really need to come up another 2 inches at least.  In fact, I had to pin up the straps this morning before she went to school because they were just not snug enough.  It's almost as if Ottobre designed the straps to use adjustable overall buckles and then forgot and did buttons-and-buttonholes instead.  Which if you want to do overall buckles would be handy.  If I make this again (I probably will, it's just too cute not to), I think I'll do that.

So y’know how sometimes you think to yourself, “Self, that there actor is interesting.  And sort of… interesting.  In an… interesting sort of way…”  And then you don’t ever really think about that particular actor much ever again?

Did you watch Masterpiece Mystery this past week?  They’re running BBC’s “Case Histories”.  You should check it out.  ‘Cause seriously: 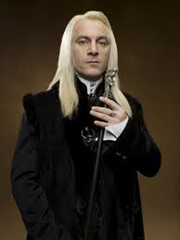 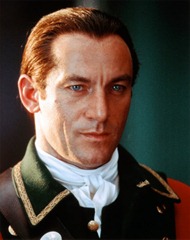 That scary guy from The Patriot?

I mean, fine.  Jason Isaacs is a good lookin’ dude.   But….  evil villains… not really my type. 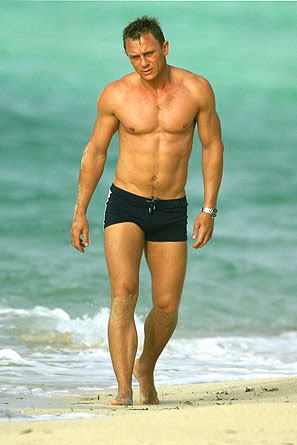 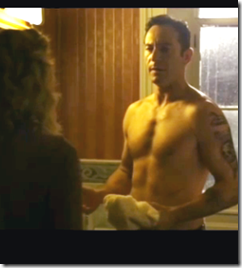 I want one for Christmas.

We leave cookies for Santa.  I think Santa should, y’know, reciprocate.

18 comments:
Email ThisBlogThis!Share to TwitterShare to FacebookShare to Pinterest

Angie A: I See Your Bet And Raise You… 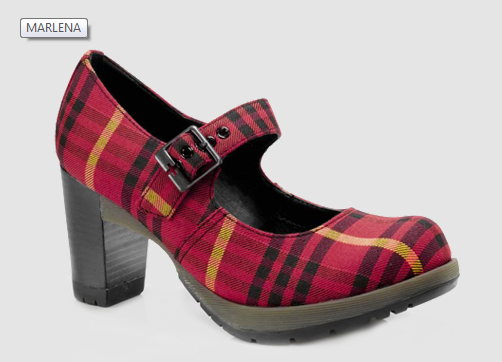 I had these shoes in my cart.  Almost.  I went to do something else and when I came back… they were out of my size!  Seriously.  My head hurt.   I had to lie down.

So I had to buy these instead.  They were half price. 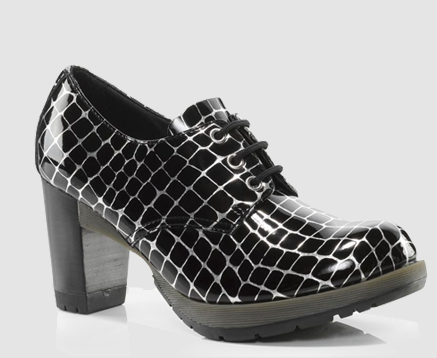 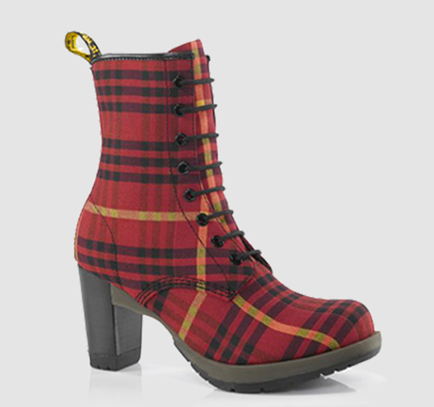 It was also worth it to watch TLo and The Big One gleefully tottering around the living room in them this evening.  I don’t know why, but they liked these. A lot.

In case you suffered from the misapprehension that I haven’t sewn anything in the past three months, I can assure you I have.  At least one thing.

This thing, to be precise: 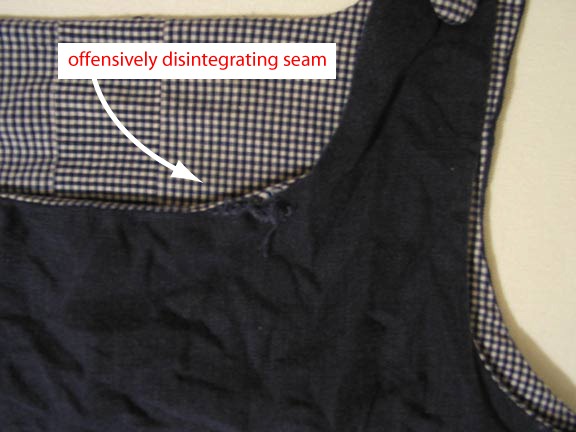 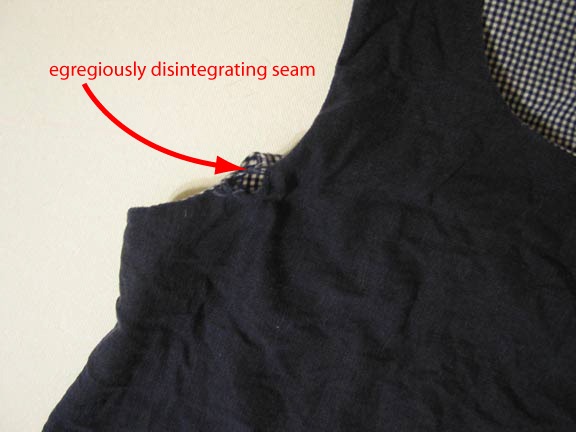 These, in case you were wondering, are photos of the linen jumper I made for TLo’s school uniform.  Which I took after I washed it.  For the fourth time.

Yes.  You heard me.  I’ve only washed this garment four times.  And I’ll probably have to throw it in the trash.

I even piped the flippin’ pockets, people. 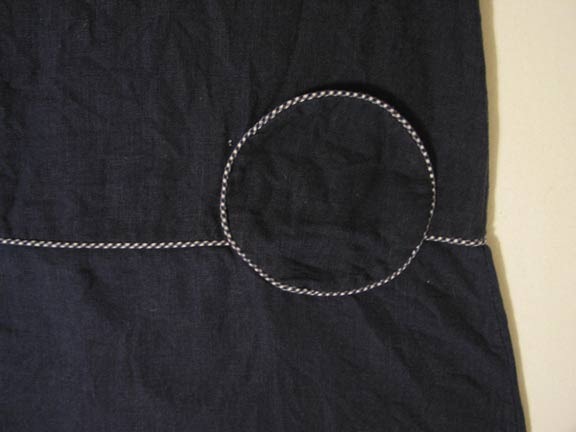 (It’s extra-wrinkly because it’s still wet from the washer.  Also, I took a picture of my toes.  Neato.) 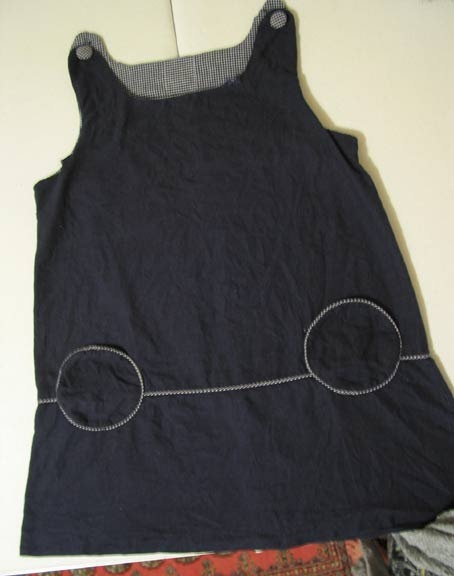 This is what I used to make the Evil Self-Destructionator 2000:  Ottobre 3/2011 #18.  Cotton gingham.  Outrageously poor-quality linen. This is what a child looks like, frolicking and blithely making a mess, when she is blissfully aware that her dress has not self-destructed. 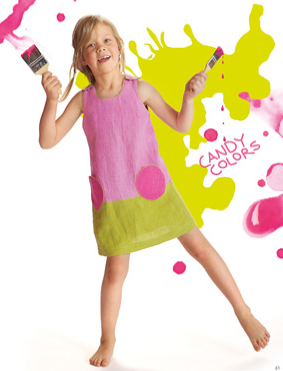 I’m not even going to bother to show you what a child in our house looks like when her dress self-destructs.

9 comments:
Email ThisBlogThis!Share to TwitterShare to FacebookShare to Pinterest

World, you fail me.

Not only did you not make me a Tintin purse, but you have also failed to make me these shoes.  In a Tintin version, of course. 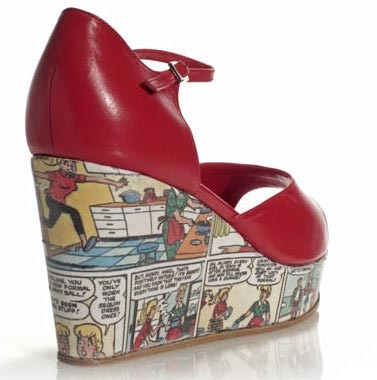 Note to self: find a pair of cheap red leather wedges.  Post haste.

Note to other people: Awesome ideas for making comic book purses.  Especially the leather-and-tshirt-print idea.  Thanks!!