Charity Begins At Home… Sort Of.

I'm pretty sure she does this stuff just to make me look bad. 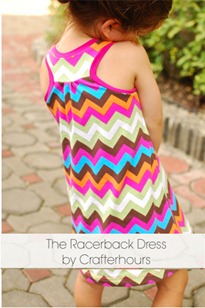 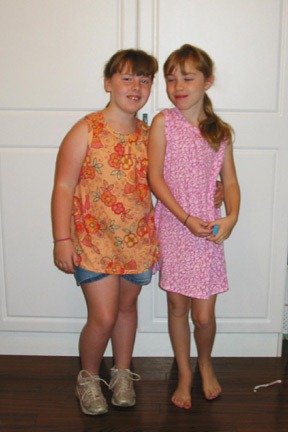 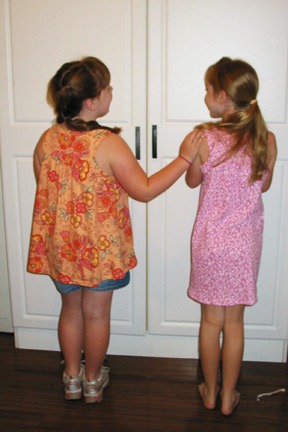 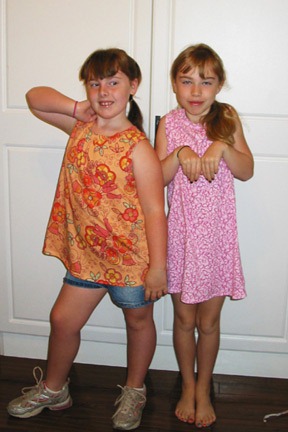 I traced out two sizes (having two sizes of Monkeys).  They are insanely easy to make.  Even I managed to do one in about an hour (and that included raising the armscyes on both patterns I cut out because they were gapping a bit at the sides and "showing our business" as TLo says).

In the meantime, I'm scoping out simpler pillowcase dress methods.  This summer the Evil Monkeys are going to try their hand at sewing a dress each and if that goes well, we'll try a dress each for donation.

I hope the little girls in Africa aren't holding their breaths on that one.  Because it could be a looooong wait.

May The Force Be With You…r Hair.

On the other hand, she now gets a whole bunch of jokes in her favorite TV shows that she didn’t get before (i.e. Phineas and Ferb, Wizards of Waverly Place, et.al.).  That’s pretty…. super-annoying, actually.

Annnnyway, The Big One is also moderately entertained by the whole StarWars concept and here’s what she got for her birthday: 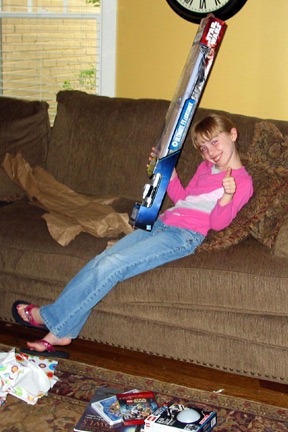 Note the pile of (mostly) StarWars junk on the floor.  That would be Legos and PlayStation games and Wii games and such. 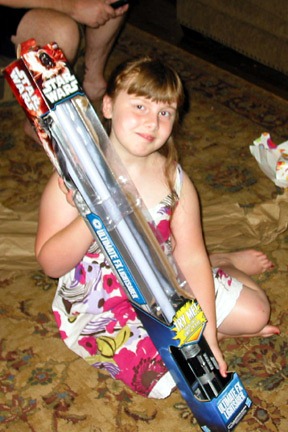 TLo got one of these too (because we’re Mean Parents, but we’re not so mean as to give The Big One her own light saber and make TLo wait another month to get hers on her birthday).

Of course, TLo has decided that for Halloween she’s going to be Princess Leia (she at least has shown true taste and culture by preferring the first three movies… although we still can’t quite get her to deal with the concept that they are the first three movies and not “Number 4” and “Number 5” and “Number 6”).  So I decided I’d do a little research on costumes, figuring anything we got they could use for dress-up as well.

Seriously people.  You would not believe the poor choices of Princess Leia hair out there.

So…. I made some.  Yes.  You heard me.  I made Princess Leia hair.  Basically it cost me $7.95 in polar fleece, a couple of hours of thought and work and the despair of telling not one, not two, but three Hancock’s employees what I was making with a yard of light brown fleece.

They are really nosy, those Hancock’s people.

Anyway, voilà!  Princess Leia Headbands.  They also double as earmuffs in the winter (and they’re concave so “real” hair can be tucked up into them, for an authentic look….  Fortunately, my clients aren’t very, uh, picky about the realism of their hair). 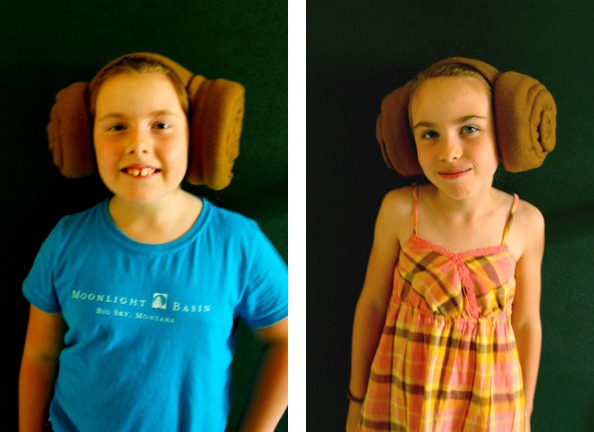 And, yes. You should be impressed.

Although I totally can not get either one of them to say, “Help me, Obi-Wan Kenobi.  You’re my only hope!”

15 comments:
Email ThisBlogThis!Share to TwitterShare to FacebookShare to Pinterest

Dude… So What WAS Up With The Boots On Your Feet?

9 comments:
Email ThisBlogThis!Share to TwitterShare to FacebookShare to Pinterest

Stabbed In The Back Seam.

So remember my new French friend?  And how I was so excited to meet her?  And my big plans to corrupt her?  And how she was going to help me fit my clothes better and stuff?

Because, really.  She insisted on messing up my intentions to corrupt her into gaining a size or four.  She had an annoying tendency to collapse in a faint at the slightest bump or knock.  She absolutely refused to be my height and seemed to enjoy towering over me.  And she would persist with Gallic perversity in having an upper chest measurement that was 3" wider than my own.  Three inches, people.  And she's a size 4.

(insert much cursing and maligning of the French here)

Most of it I was willing to overlook or accept.  All I asked was that she meet me halfway, that she compromise just a little.  But I just could not convince her to have a smaller upper chest.  I begged.  I pleaded.  She would not listen.  So after many days fraught with tears of anger and a deep sense of betrayal, I finally succumbed to the inevitable. I dumped her.

Distraught and dismayed, I searched for solace. And impulsively reattached my affections on my new best friend.

She was on sale.

At first I was a little nervous about her.  Would she be sturdy enough to not fall over every time I walked past her?  How would she take to corruption?  Was she short?  And most importantly, what size was her upper chest?

Because that's the question you always want to know about your new best friend.  Right?

Well, I can tell you: she's perfect.  She is sturdy enough to hold her own in a fight to the death with things like denim and linen.  She corrupts really well with a little padding.  With a simple adjustment, her shoulders are at the same height as my shoulders.  And best of all, her upper chest is a nice dainty 33".  She's my soul mate.

Because check it out!  I totally padded her out under my custom-fit sloper and voilà!  She's just. like. me. 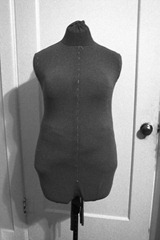 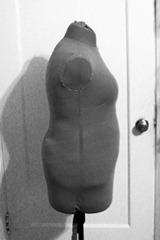 There is a possible chance that I may just hate my new best friend a tiny little bit.  We may have to be frenemies.