Filed under: binder feet, tutorial
Today, Gentle Reader (I like to maintain the fantasy that I have Readers), today we will have a short break, an intermission, a pause, a hiatus, an idyll if you will.

Yes, I own a thesaurus. What's it to you?

Where was I? Oh yes, we are proceeding with what I will henceforth call The Great Uniform Interregnum. Otherwise known as "I'm going to write about something else because I'm a little bit tired of uniforms and also I made a dress for my younger daughter (The Little One) and it was a total disaster, but I realized that I have a tip to share with everyone about coverstitch binder feet". Or something like that.

Oooo, that should have been the title of this post. Too late. However, it's a totally true statement. Binder feet do suck, with a suckiness that knows no bounds. There is little in the sewing world I loathe more than binder feet. I base this hatred on cold, hard experience.

I just did a mental reckoning and I have no less than five binder feet, not a one of which works properly. (A wise reader such as yourself might, at this point, be wondering why I continued to buy binder feet after the first two -or even four- didn't work. This, Gentle Reader, is a damned good question.)

I have two binder foot attachments for my sewing machine (which is a Brother, in case you're wondering) and three, count them THREE, for my coverstitch machine (which is a Janome). Fortunately, being the Queen of Cheap, I bought generic feet for my coverstitch machine on eBay, so instead of the hundreds of dollars I could have spent on brand-name feet I only spent about $45 on all three feet total. I guess wasting $45 is better than wasting $450.

(And before you accuse me of being merely inept with binder feet, Gentle Reader, I would like to state for the record that I am, under normal circumstances, a mechanically-inclined type of person. I deal with recalcitrant industrial printing equipment all day, for Pete's sake, and that doesn't cause nearly half the trouble as those evil little binder feet cause.)

Anyway, the long and the short of it is that I have completely (completely) given up using any of these stinking feet. Er... no pun intended. Instead, I do a what-seems-like-it-should-take-longer-than-using-a-binder-foot-but-isn't-when-you-factor-in-time-wasted-on-evil-binder-foot-setup process that is multi-stepped but works perfectly every time.

Step Being the First:

Cut out your binding strip as you usually would. You can do this technique using either a raw-finish or clean-finish strip. My example shows a clean finish.

Step Being the Second:

Your seam width should be wherever the fold of the strip is meant to be (in other words, if you intend to do a clean-finish binding and your finished width is 1/2" -you have a 2" strip- set your seam width to 1/2"). Using a BASTING STITCH, attach the strip to the garment, right sides together. You will be removing all basting stitches when completed. 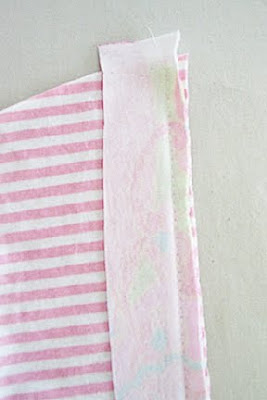 Step Being the Third:

Press the strip towards the seam allowance, so that the right side of the strip is showing. 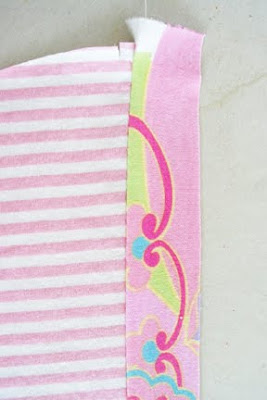 Turn over the entire garment so that the right side is on the table. Now fold the raw edge of the strip into the center to meet the center of the strip. Press heavily. 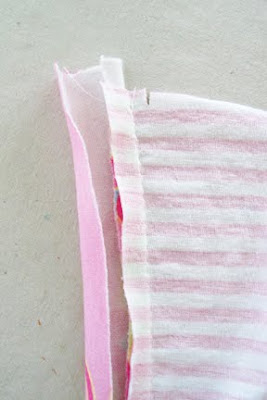 Step Being the Fourth:

Fold the strip again so that the edge of the garment is wrapped (in otherwords, it looks like binding). 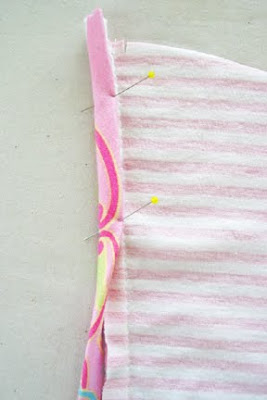 At this point, the fabric I'm using will determine if or how much I pin the strip in place. In this case I pinned all the way around the entire edge because I was using jersey knit as my binding and it tended to curl a lot. In other cases I might skip the pinning. 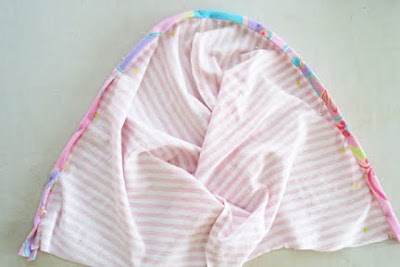 Step Being the Fifth:

Using a basting stitch, stitch through all layers down the middle of the binding strip. Be sure to stitch in a place where your final stitching won't overlap, so it's easy to remove the basting. 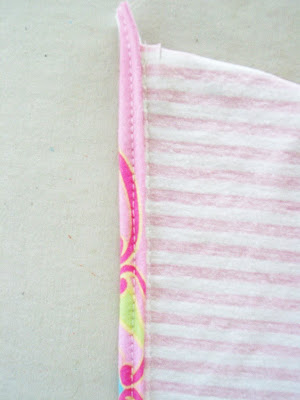 Remove the pins. You should now have a completely bound edge basted in place.

Step Being the Last:

Once everything's in place and tacked down, you can take it over to the coverstitch machine (or if you're using a double or single needle on your sewing machine) and stitch it down permanently. The nice thing is you don't really have to adjust anything, you just line up the presser foot so the stitches run down the center of the binding.

When the permanent stitches are in, be sure to remove BOTH basted seams. This will release the edge of the binding so it looks "normal". 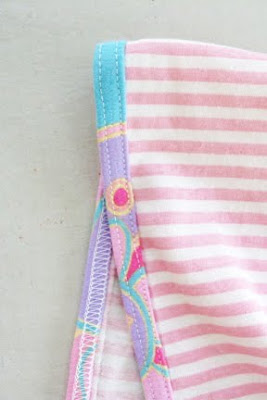 (this is a slightly bad example, as my coverstitch machine chose this moment to start skipping stitches)

In conclusion: The only difference between a garment using the traditional binder foot and a garment using this method will be the utter lack of eye-popping, face-reddening, blood-pressure-raising stress on the creator of the second garment. Yes, it does require several more steps than the binder foot method and on paper looks like it will take much more time. This idea fails to take into consideration all the facts, however. You can write it as an equation:

R is the result, where T is time spent, F is frustration trying to get $#*@!* thing to work and n is the incremental increase of F relative to the increase of T, caused by having to adjust and readjust and re-readjust and generally mess with the binder foot eighty times to get it to work correctly.

Using this equation, there is just no rational excuse to use a binder foot. The math says it all.