Filed under: KwikSew, KwikSew 3226, polo shirts, school uniform
OK. So I just read this post (well, I had to, it's really really hard to write a post without actually reading it). Apparently I have a little too much to say about polo shirts. I surpise even myself. I'm afraid I'm going to be one of those people. You know, people who stand around at parties or soccer games and drone on and on and on and on and on... about model trains or low-carb diets or collecting pygmy elephants or whatever. It seems I'm like that with polo shirts. This is really weird, since as a general rule I detest polo shirts. This post is just the first, well second, of many many things I have to say about, yes, polo shirts.

I started out on the Polo Shirt quest with Kwik Sew 3226. 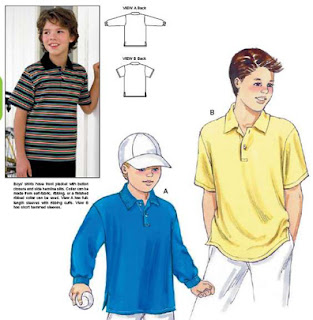 Unfortunately, I seem to be incapable of remembering that I usually really dislike KS patterns. They're sort of like frozen packages of diet chinese food: They seem like a good idea, but when I get them out of the package I'm always disappointed with the reality.

This KS pattern was like that. I chose it because I'd never made a polo shirt before and I had the suspicion that the placket would be tricky... too tricky to try to make one from BWOF or even Ottobre without picture instructions, even though I have several issues of both magazines with polo-like shirts. So I bought the Kwik Sew, because one thing I will say for them: they usually have excellent illustrations and instructions.

Unfortunately, they also seem to almost never make anything the way it's normally made. Case in point: this pattern doesn't do a 'typical' polo/rugby placket. It has this weird facing thingy that, when completed, forms a sort of floppy interior mess. I am of the opinion that needlessly excessive facings are pure evil. This one is a prime example. 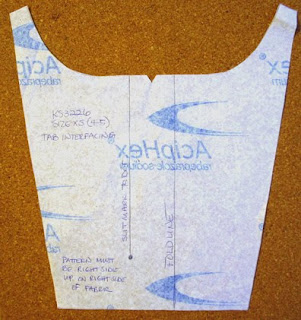 Of course, I'd already cut out all the other pieces before I realized how awful the Floppy Facing would be. And of course, this shirt was part of my "let's see how many unwanted adult shirts we can use up for school uniforms" plan as well. Which is to say, I had a very limited quantity of fabric to work with (i.e. one 2XL-sized shirt's worth).

In the end, I found two useful rugby placket tutorials online: one here, apparently from Timmel Fabrics, although mysteriously you can't actually go to the Timmel Fabrics website. The other one is from Dawn at Two On Two Off. They both basically say the same thing, although Timmel's is more verbally descriptive and Dawn's has really good photos. Feeling more secure with a few pictures behind me, I scrapped the Floppy Facing and scrounged up enough remaining fabric to make a 'real' placket. 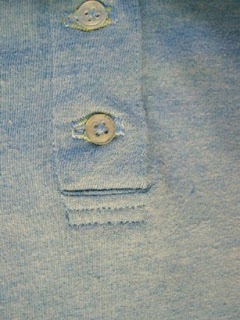 I can't say I did a very good job, but it was a place to start. The buttonholes are particularly disastrous, but I think that's mostly because I had the wrong needle in my machine and didn't realize until too late.

In any case, I plodded on. This first shirt was the result. I'll say right now that it's pretty dismal all things considered, but it was more of an experiment than an attempt at a perfected piece. I ended up changing the collar to a peter pan collar that I drafted myself, since I actually used an "old" (and, as far as I can tell, never worn) long-sleeved t-shirt I got from my mom. It didn't have a collar that I could cannibalize so I made this one instead. 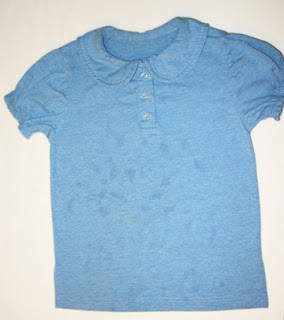 No, those are not dust spots from my camera. The Big One has worn this shirt at least three times, which means it's basically destroyed from mysterious irrevocable spots. She is Very Messy.

I also gathered the cuffs of the sleeves with elastic, because the original pattern produced gargantuan sleeves... way too humongous for The Big One's little stick arms. The gathering had the added advantage of being more girlie. 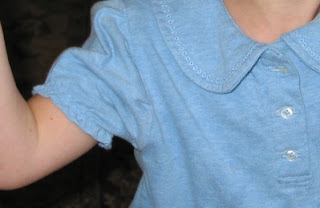 I also thought I'd try out the decorative stitching on my sewing machine with a wing-needle, just to see what would happen. Nothing much, apparently. This was probably not the best fabric to try it on. 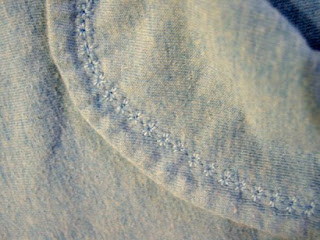 Since making this, my further efforts in the Polo Shirt quest have been better, especially since I completely changed my base pattern. All in all, I'm chalking this first one up to a learning experience. I learned:

B) Kwik Sew patterns are just not for me. Maybe I'll remember that before I purchase another one. But probably not.

And C) despite owning approximately two thousand sewing reference books, not one -one- has any sort of instruction on how to sew a rugby/polo placket. And my multitude of sleeve placket instructions just don't quite cut it.

Clearly I have to purchase a few more books. It's for the children.
Email ThisBlogThis!Share to TwitterShare to FacebookShare to Pinterest