Sunshine On My Shoulders Makes Me Happy. I mean, “…productive”.

Some people like to think of prioritization as some sort of systematic ladder or flow chart: everything has it's place relative to it's importance and once each thing is in it's place it's merely a matter of starting at the top and working your way down.  I, on the other hand, operate under the "crazy old gold miner standing in a stream with a sieve" theory:  I put all my projects and chores and obligations into one big pan and shake it until there's nothing left but whatever's randomly left on top.  Everything else is left to fend for itself in the mud.  I'd like to blithely say "this works for me", but of course that's completely ridiculous.  This is not a system that "works".  It's merely a system that exists.  It does not lend itself to productivity of any kind (it does, however, lend itself to owning the messiest and dirtiest house on the block.  There are some perks.)

Apropos of that little anecdote, over the past weeks I have in fact created several items in my lovely newly arranged studio.  I have not, however, taken any photos of these items.  And I do not, even more importantly, have anything particularly witty or amusing to say about them (we'll just ignore all of you who are now muttering to yourselves, "She's normally witty and amusing?").  I made TLo a ruffle-y corduroy tunic for school.  I also made her a little knit jacket with a faux bow on the front.  I added mod ruffles to her Ruffle-less Mod Uniform Dress.  I made a muslin of a knit duster for myself.  And so forth and so on.  I just can't seem to be bothered taking photos or writing about it all.

And apropos of that testimonial to ennui: Guess what I decided I'm getting for my birthday? Uh, three months early...? A sun lamp.  I don't mean one of those things raisin-like women from the 1970's baked themselves to a dark, leathery brown under.  I mean a full-spectrum light box, for the reduction of S.A.D., from which I suffer something fierce (as my mother said last week, “You are so SAD.”  I’m just assuming she meant Seasonal Affective Disorder.  Right?  Right?)

I'm hoping it will help with the focusing and prioritizing and energizing and whatnot.  Or at least I'll be really, really tan.  And leathery.  That's a look that goes with "crazy old miner" right? 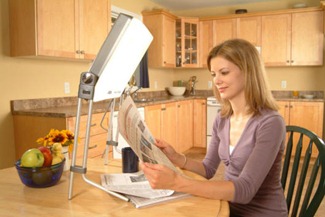 If I buy this, will my kitchen suddenly be that clean?  That would be super-fab.

Perhaps I’m asking too much of a box with light bulbs in it.