I've completely given up trying to get a photo of myself with decent hair.  It's apparently just not possible.  Um.  I guess it would help if I quit taking pictures of myself with wet hair.  But at 6:30 in the morning, time is limited and you have to grab two minutes with the camera when you can.

Bonus: I also look like a deranged serial killer.  (Now you know why most of my pictures don’t have heads, Angie A.)

These are photos of my second attempt at version 2 of my Perfect T-Shirt Pattern (the one with darts-converted-to-smocking).   It was pretty clear from the outset of my first attempt that the fabric was going to be difficult.  The results proved that. 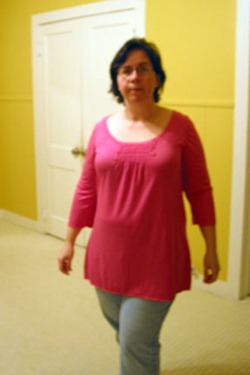 For the second attempt I decided to try sturdier fabric, so I used a very pretty cobalt blue ITY that I found on sale at Hancock's. 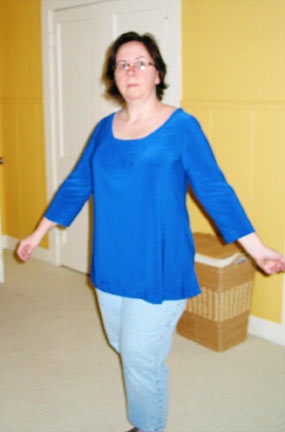 This was helpful in terms of fit and drape.  Unfortunately, this fabric is nigh on impossible to hem without a coverstitch machine, which I couldn't be bothered to set up.  Mostly because I didn't have matching thread.  So I didn't have anything to set it up with.  Hence, I hemmed it with my sewing machine.  Rather disastrously, as it turns out.  Clearly I'm going to have to pick out that hem and do something else with it. 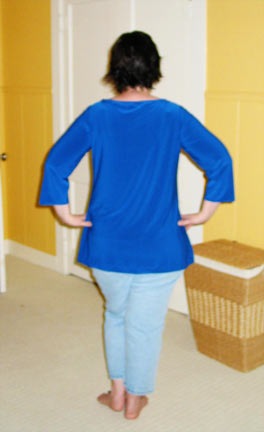 That photo also points out the major flaw with my Perfect T-Shirt Pattern: namely that because I am a hunchback (i.e. I have to do a rounded back and rounded upper back adjustment) I ended up with my usual extra 1" at the neckline.  Normally in a woven I would either take a smart dart under the collar or do a center back seam.  Neither of which is so great for a t-shirt.  I was hoping I could ease the extra into the neck binding, but as you can see it didn't work.  I'm going to have to rethink my plans for this. 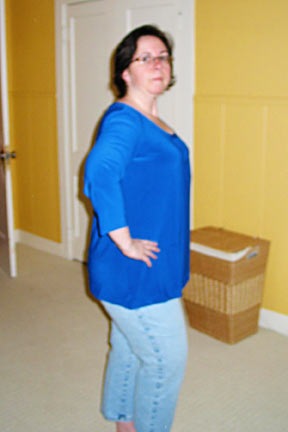 Otherwise, this top drapes much better than the other one which is all the result of fabric... since they're otherwise identical.

I'm willing to keep working on it, at any rate.

I still hate hair.  I think baldness is highly underrated.