Actually, the same two life lessons.  I'm a little slow on the uptake.

The first lesson is "I just should not be allowed to take my own picture.  Ever."  Unless I really am:

a) perpetually out of focus and poorly lit 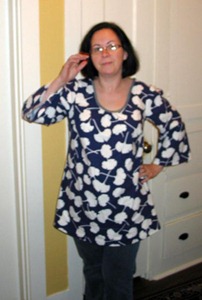 b) An asylum escapee with no chin

c) Astonishingly irritated with everything and everyone, super-duper crabby and looking like a wrinkly old bat 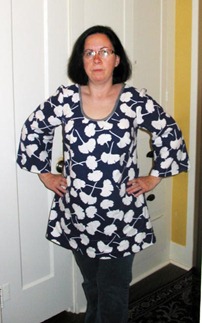 Ok fine. Item C isn't totally outside the bounds of possibility.  But still.

The second lesson is one that I just can't seem to wrap my head around no matter how much I remind myself.  Namely "I should always wait a day or two before I decide whether or not a garment really is as disastrous as I think it is".  Because on Sunday when I finished the neckline on this tunic I was seriously disturbed by the fit, the finish and the general look of it.  Distraught, practically.  But today when I tried it on to show you all just how disastrous it was, I discovered that it's not nearly as bad as I remembered.  It’s not great, but just possibly not the first sign of the apocalypse.

So I guess I'll finish the sleeves after all.


Oh, this is what the fabric actually looks like, it's really royal blue not black.  The hem band on the inside is a lavender linen with weird white roses painted on it. 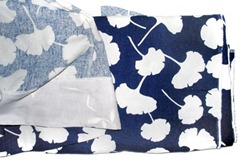 edit: The one advantage to photos, even these horrid ones, is that I get a better sense of how something fits… or rather, how something looks like it fits.  In this case, would you say that this is too big starting, oh, pretty much at the armscye and working down?  I’m inclined to say it could be taken in just a tiny smidge.  Which is totally fascinating, since I made a way smaller size at the hip than my measurements call for.  Um.  Like you’ve never heard that before, right?  What is the deal with that??

edit the seconde: Re: the camera being up high—in fact, it was sitting at pretty much the same height as my husband’s head or in other words where he would hold the camera were I to allow him to attempt taking my photo.  He’s short(ish) for a guy so it’s not especially high relative to how people on the street might see me.

I am very, very short.

I’m thinking of investing in a tripod.  I used to own a tripod but I have absolutely not one clue what’s happened to it.  Probably wherever my film camera is (you know, those things people used to take pictures with?).