In Which I Remember That I Actually Have Two Children

Filed under: Ottobre 1-2008 #6, Ottobre Design, school uniform
OK, so some of you may be thinking to yourselves "Doesn't that woman have two children? Wasn't she sewing some sort of uniform S.W.A.P.? Did she just sell that other kid or what?" To which I say "Yes, yes and ha!"
It occurs to me that most of my posts recently have been about TLo. So today we will take another epic excursion into the world of Uniforms. Actually, this is more like a day trip to the land of Blouses. But whatever. Ottobre 1-2008 #6. 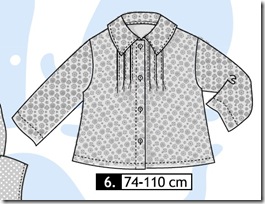 The Big One wore this blouse today, which meant that I had to take it to the cutting table to iron it and so I figured "Hey, what the heck. Let's get a photo." (My children are probably going to be warped and require years of therapy as adults because every morning before school I insist on taking their picture. Or at least, this is what I'm telling myself will be the cause of their years of therapy.)
Someone, somewhere recently said they hate it when people post up photos of wrinkled garments. To which I say "If you think I actually iron my children's clothing on a routine basis, you are living in a fantasy world." This garment is no different.
Saying that, this first photo was taken before I ironed it. Goofball Girl there is "twirling". 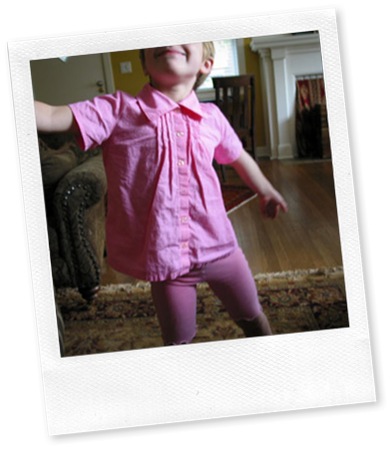 Then I actually made a half-hearted attempt to press it on the pressing table and this was the result. I don't actually own an ironing board so most of my ironing attempts are half-hearted. Actually, I lie. I own two ironing boards, neither of which lasted more than two months before breaking in such a way that they became terrifying death traps whereby they suddenly take it into their heads to fling themselves to the ground, usually just after I've set the iron on them but before I've moved my feet away from underneath. I outright refuse to buy a third ironing board and so I am consigned to using my pressing table for all our ironing needs. Which isn’t highly successful. It's a good thing we're slobs.
And finally here is Goofball Girl dressed for the day and ready to get up and at 'em (that is something my grandfather says and it cracks me up). 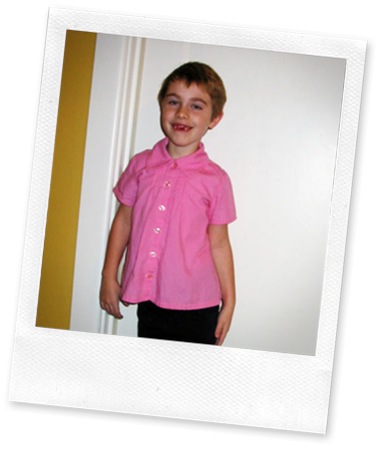 I wish I could remember what the heck I did with this pattern, but I can't. I think I cut a 98 and lengthened it to a 110 (because I made this in August and The Big One was shorter then). I do know I shortened the sleeves. Otherwise I suspect I made this as directed (but then, who knows?). I recall that it went together pretty easily and I had intended to use this pattern quite a bit. But after making two versions I decided that the flared body of the shirt was a little too, well, flared and by then I was on to the horrors of polo. Shirts, that is. The Big One gets compliments on this blouse though, so go figure.
And honestly, we really do groom our children. I have no idea why The Big One's hair always looks so ghastly in photos lately. Clearly she needs... help. Maybe some mousse? Yikes.
Email ThisBlogThis!Share to TwitterShare to FacebookShare to Pinterest