In Which TLo Wears Some Weird Shoes

Thanks for all the well-wishes. I am feeling much better today. Today I am blithely coasting along life's happy little highway, swerving carefree around the oil slicks of boredom and ignoring the orange traffic cones of irritation and annoyance. La la lala! See? That's me chirping away with the happy little birds like Snow White.

No, I am not tripping on acid.

So on Sunday I decided that TLo really really really needed something to wear with the Christmas leggings that my mother insisted on buying her. She had absolutely nothing in her wardrobe to go with these leggings but despite my telling her, my mother insisted on getting them. And then proceeded to quiz me every day about why wasn't she wearing them there are only twentyfour twenty fifteen days until Christmas and then what will she do with them?

Maybe TLo gets her irritating personality from my mother after all.

So, Christmas top to go with Christmas leggings. Aha! I decided to make it easy on myself.

1) I had pattern Ottobre 3-2008 #12 already cut and fitted.
2) I had two yards of black poly knit panne velvet from when the girls were still taking ballet and gymnastics and then decided to switch exclusively to soccer about two weeks after I bought six yards of panne velvet for dance-and-gymnastic uniforms.
3) I had some totally awesome fold-over elastic binding that I got in Portland on my totally awesome Palmer/Pletsch vacation two years ago and I hadn't ever (to my knowledge) used it. 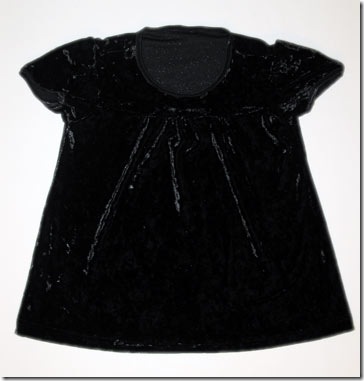 Ta da! This actually came out really well, I only had to rip out one thing and for once I actually selected the correct stitch to do something new THE FIRST TIME I TRIED IT. Unheard of. 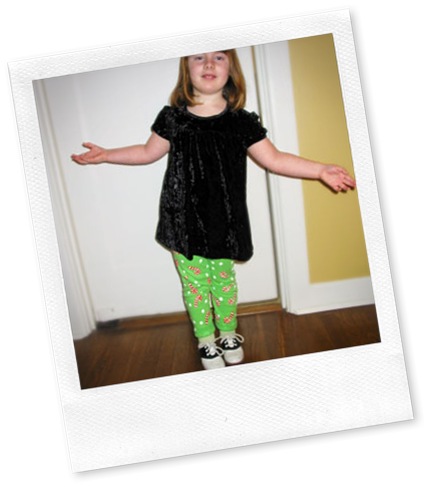 So chirp away little Disney birds. I'll just chirp along with you. I will not be daunted by the fact that TLo refused to wear her very cute black MaryJanes and instead insisted on wearing her saddle shoes. It’s still a happy chirpy outfit. So there.