I Suppose Your House Could Use A Little Paint, Dontcha Know?

Recently Joy at 21 Wale mentioned that someone had made a "Minnesota Nice" comment.  This sort of made me homesick.  One of the hardest parts of moving away from Minnesota (and her up-tight, even-more-nice sister, North Dakota) is the lack of Minnesota Nice that seems to pervade the rest of the world.

The wiki article linked above made me laugh:

“Sometimes area residents who move away, or otherwise come in contact with others who don't subscribe to the ideal, say that they have to shed their ‘Minnesota nice’ in order to interact properly with others or get out of troublesome situations.”

I do have trouble in other cultures (for example New Zealand or Texas) getting my point across sometimes.  Apparently people there don't perceive a gently spoken, "Well, I suppose the lawn could use a little trimming..." to mean "Your lawn is a disaster.  Don't you ever mow that thing?  Your neighbors must hang their heads in shame. As should you."

People in other places also apparently don't take three hours standing on the front driveway to say goodbye to people they're going to see again in four days (this, by the way, is known as the "Minnesota Goodbye").

And people in other places (at least the ones I've been to, which is quite a few) don't seem to be quite so obsessively concerned with The Greater Good (theeee grreeeeaater goood....).

You have got to watch "Hot Fuzz" if you've never seen it.  GOT to.  It is hilarious.  It’s for the Greater Good. 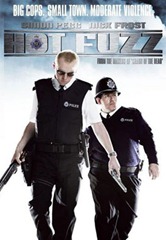 Huh.  My husband is a British citizen.  We could still emigrate to Canada, right?  They totally get Minnesota Nice (although I’m sure they’d tell you they invented it and it’s called “Canadian Nice”… if they weren’t too nice to say so.)

Bonus Joke:
Q:  How do you know when you step on a Minnesotan's* foot?
A:  She apologizes.

*You can put “Canadian” in there if you prefer.