It Just Keeps Getting Weirder.

Dear Gentle Readers.  I now have proof—proof, mind you-- of The Weirdness Of The World.  The following is the first draft of a post I was maybe going to put up today (but had decided was sort of silly):

Right.  So apparently due to his being a nurse, the Husband feels compelled to gossip like an old woman… er… I mean, have interesting conversations with his co-workers.  Somehow last night the topic of Celebrity Free Passes came up (I guess they were discussing the movie "Hall Pass") and the Husband mentioned that he had "lost out" to (my celebrity boyfriends yes they are mine all mine no really oh just shut up who asked you anyway) Hugh Jackman and Daniel Craig.  Which, when I heard this, I basically responded with much high-pitched derisive laughter and finger pointing and possibly the words, "Oh honey, you don't even make the list, it's a CELEBRITY free pass, you are not a celebrity and also I already have sex with you on a fairly routine basis you goof ball bahahahahahahahhahaha"  etc etc etc.

Annnywho, The Husband scowled at me over his hamburger and then this happened: he started listing his Celebrity Free Pass list.

At which point I became deeply, deeply disturbed.  Because really?  Those are some scary-ass women.  Like, people whom I wouldn't even want to be in the same room with, let alone anything else.  Rachel Wiesz springs to mind.  That woman gives me the heebie-jeebies.  I have no idea why.  She just does.  And

This is what happened yesterday: 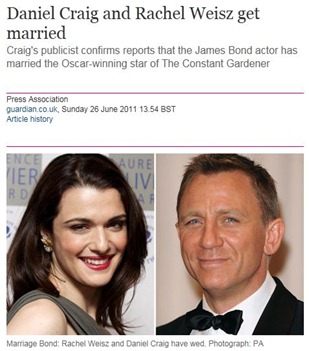 edit: in the interest of clarity, I should maybe note that I usually write my posts two-three days in advance… in this case, I wrote on Friday.