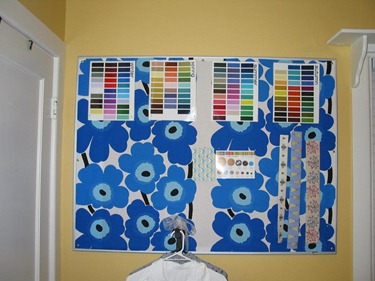 I am so funny.

This is actually my old bulletin board (as seen in this photo).

All I did was cover it with some genuine Marimekko Unikko fabric that I purchased (at genuine exorbitant cost) from… uh… somewhere or other.  Actually I think from FinnStyle.com.  My original plan for it was to make it into a shower curtain.  Or rather, a part of a shower curtain.  Don’t ask.  It was a long and complicated design idea involving three fabrics, clear plastic, jumbo curtain rings and a blowtorch and that’s why I never did it.  The clear plastic was kicking my butt.  Meantime, it’s been sitting in my stash for three years.

I heart Marimekko.  When I was a child, I spent a lot of time at my grandparents’ apartment.  It basically looked like this: 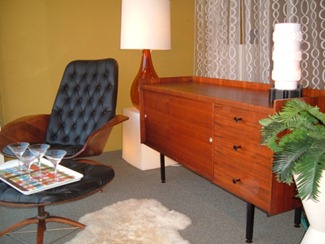 My grandparents were all about the Danish Modern.  Danskware, Bertoia chairs and teak featured heavily in the formative years of my childhood.  Also Marimekko.  Remember in the early 70’s when imported Scandinavian fabric stretched on canvas stretchers and hung on the wall was the height of home decorating?  I do.

As a child, it took me several years to realize that when people spoke disparagingly of “grandma furniture”, what they probably meant was this: 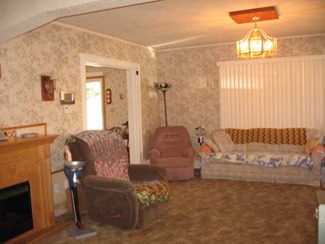 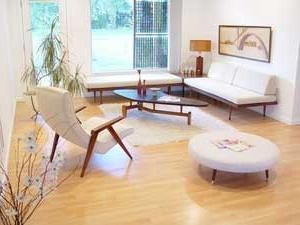 (Which probably explains my bewilderment at the disparaging tone, as well.)

Look!  There I am in their apartment, all bohemian and whatnot.  Well.  As bohemian as you can be with saddle shoes on.  Note the lovely rosewood credenza-and-mirror, circa 1970.  Ok, fine.  It’s a little hard to see in black-and-white.  It was 1970.  Kodachrome was expensive. 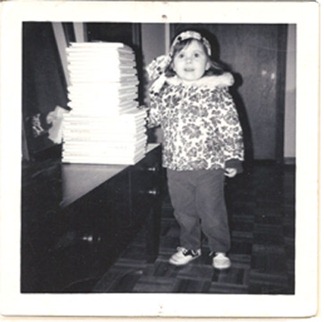 Annnnnnnyway, I attached the fabric whole-piece with thumbtacks (seven, to be precise, because seven was all I could find).  I hang things on it with quilting pins (you know, the huge pins that you can’t possibly use for garment sewing), so they don’t really cause much damage to the fabric (should I ever get over my fear of clear plastic and decide to make a shower curtain).  Easy-peasy.  Make one in an hour!  It will only cost you about $90.  Pssht.  You can’t afford not to, right?

(Good grief.  Who has an ninety-dollar bulletin board??) 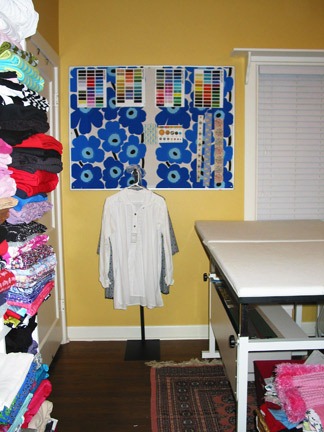 Yes, there is too a difference.