TLo is rapidly outgrowing everything I make for her.  Outgrowing in width, that is.  I'm pretty sure she hasn't actually grown in height for at least two years.  That kid is a midget.  A very round midget.

Now, I'm not complaining about her size out of meanness or to be judgmental (because obviously that would be crazy-hypocritical).  I'm complaining because fitting her is rapidly becoming like fitting a beach ball.  Seriously, have you ever tried to put a rubber band around a beach ball?  Now picture trying to make that beach ball a pair of jeans.  Ack.

So poor little TLo wants a new pair of jeans, which I will make for her this week after I finish making a muslin of my new winter coat.  In the meantime, because I actually kind of sort of maybe a little bit was feeling guilty about not making her any pants at all this year, I made her this cutie-patootie skirt. 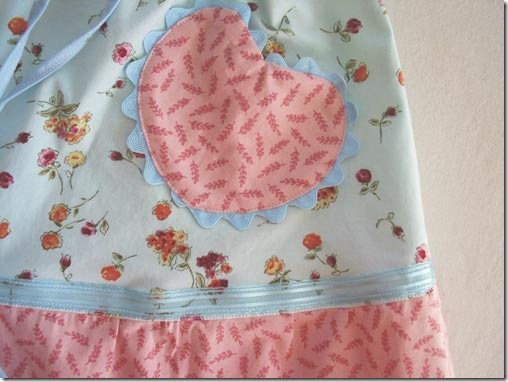 An offering to assuage my (sort of) guilt.  A consolation prize if you will.  I had a feeling the large quantities of flowers, ruffles, ribbons and general decoration would make her happy.  I was pretty sure the heart-shaped pockets would push us into "O.M.G.   I love it!" territory.  I was right. (Ah, children.  They are so predictable.) 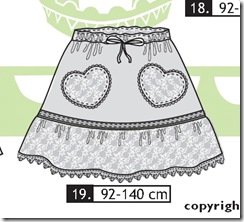 I used the Ottobre 1-2009 #19 "Hertta" skirt.  Now, my Finnish is significantly worse than my German or even my Ojibwe (which is to say, I speak no Finnish whatsoever) but even I could figure out that "hertta" was probably in some manner cardiac-related.  I was right (I figured this out through the ingenious use of google-translating... oh Google, you make us all look so smart).  "Hertta" = "hearts".   Shocker, I know. 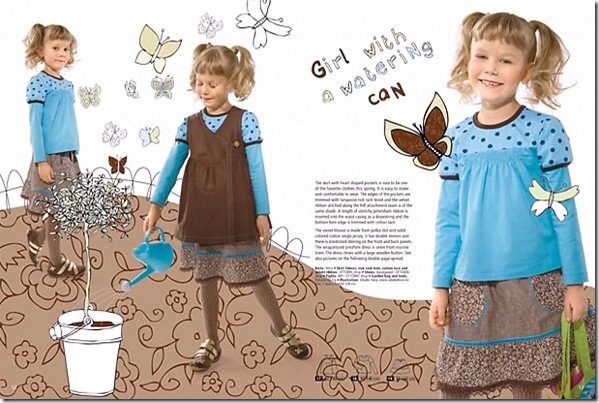 I'm not sure how well the photos have come out.  The colors are robin's egg blue, sky blue and a sort of salmony-pink.  I'm pretty sure I cut this as a size 110, which I was hoping I could get away with due to the gathered nature of the skirt. 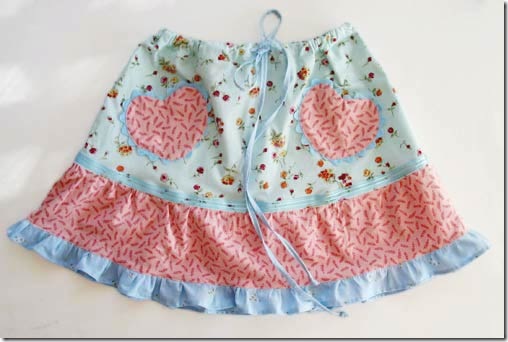 I did have to make a change to the pattern to accommodate the Beach Ball effect.  The pattern calls for gathers in the yoke of the skirt to fit the waistband.  This would have made the skirt impossible for TLo to get on, so I extended the waistband to match the ungathered width of the top of the skirt and omitted the gathers.  The elastic took care of the rest.

Oh yeah, that was my other change.  Instead of elastic all the way around plus a drawstring, I did my usual method for drawstring garments.  Which is: cut a piece of elastic to about 3"-4" smaller than the child's waist measurement.  Sew a finished string tie (however you're making those) to each end of the elastic and thread this through the waistband (this assumes you've already made buttonholes or something for the ties to go through).  If your elastic tends to slip, you can bar-tack it at the center back, but I didn't need to do that in this case.  Just be sure that your drawstrings are long enough to tolerate being pulled into the casing of the skirt by the elastic, which will happen.  I learned that lesson the hard way.  Which explains why when my mother asked me, "What's up with those really long ties on that skirt?" I just shook my head sagely.  Better too long than too short.

Too bad I didn’t think to take a picture of that method, huh?  Doh!  Oh well. 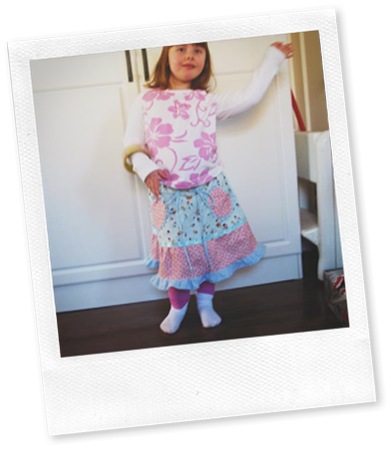 Awww.... such a happy little beach ball dancing in the pantry.  With a packing-tape bracelet.  And some serious clothes-matching issues.

I heart hearts.  Good thing I heart weirdos, too.