No, this isn’t a post about The Big One, although she most definitely would qualify under most circumstances. (Poor, sad, weird Big One. She is so very much like her mother, but with more gloom and doom- which most people who know her mother wouldn’t have thought was even possible).

No, this is about David Bowie.

You saw that coming, right?

My husband and I watch a lot of English TV (possibly because my husband is English or possibly just because we prefer it). We’ve been watching “Life On Mars” the past few weeks, which I love. Aside from the great writing, fabulously funny set design (and my growing crush on John Simm), it has an awesome soundtrack. In fact, as soon as I’m done writing this I’m going to go see if there is an actual soundtrack you can purchase. Because you see, since we’ve started watching this show I’ve had “Life On Mars” (the song) stuck in my head. And having listened to this show for the past few weeks I’ve come to realize that our iPod is sadly lacking in glam rock. We have no T.Rex. We have no Roxy Music. I used to own several David Bowie albums on vinyl but I couldn’t even hope to tell you where they are now. I have one Queen song. Good lord. How have I managed to live like this for so long?

In the past I would have turned up my nose at purchasing a soundtrack. I would have bought the whole album, the “real” album. None of this dilettante soundtrack nonsense. But nowdays I’m more relaxed, more open-minded, more… poor. Do I really want to buy an entire Mott the Hoople album? Probably not. I’d rather spend my 99 cents on “All The Young Dudes” and be done with it.

Meantime, here’s a YouTube of “Life On Mars” (the song). 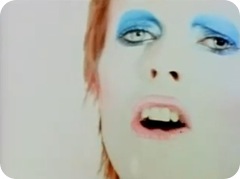 I'm off to see what I can get with my conveniently-given iTunes gift card. I'm pretty sure we'll be getting singles from T.Rex and Sweet. I might have more trouble eschewing the purchase of entire Bowie albums. I mean, come on. Just one David Bowie song? Ah, David Bowie. You poor, sad, weirdo. No wonder I like you best of all.