This is sort of how my daily internal life goes.  I know.  You're totally interested.

1) Did I ever mention that my husband is a rugby nut?

I mean, he's certainly nuts in lots of other ways, but he's very specifically nuts when it comes to rugby.  Well, to be even more specific, when it comes to Rugby League.  (Because of course we all know that Rugby Union is just so many prissy southern prats fannying about on the pitch.  We all knew that, right?  Ok, well for those of you who are sane and didn't know that, this is sort of the sporting equivalent of Sunni and Shia Muslims... to the outsider the differences seem bogged down in minutiae.  To the participants?  Not so much.  And probably you'd be wise not to suggest it.)

As you may know, the United States of America is not so big on rugby.  Which, besides meaning that my husband suffers greatly, also means that we don't spend as much time watching rugby as we used to.  And by "we" I mean my husband.  Which leads me to:

2)  So my husband and I get these DVD lecture series from "The Teaching Company".

These are totally awesome lectures on just about any topic your heart could desire.  We tend to delve pretty deeply into the ancient history section, with minor forays into modern history.  Last week my husband ordered "The Rise and Fall of the British Empire".  I'm pretty sure this was some sort of passive-aggressive response to the "American Identity" series that I bought him for Christmas last year.  Although, had he asked, I would have pointed out that having the words "Rise and Fall" in the title isn't necessarily the best "in your face" that you could hope for.  Actually I'm going to point that out anyway, whether he asked or not.   (Note to self: harass husband.)

In any case, last night we watched the introductory lecture and in it the very English lecturer happened to say "...and Canada, where the hinterlands of the plains provided a bounty of wheat".  This made me giggle.   Based on my husband's reaction (i.e. he looked at me like I was a lunatic), you folks aren't going to find it very funny.  But having grown up in the (only slightly more southern than Canadian) hinterlands, it just cracked me up.

The thing is, I'm feeling a little hinterland homesick lately which is in part what made me giggle.  I know that my husband, for one, thinks we live in the middle of nowhere here in Texas and it's as flat as can be.  He is wrong.  He has never been to the northern hinterlands and so he just doesn't get it.  Right now we live less than two hours from a major metropolitan area.  And I mean, you can only see about four miles in any direction here.  Psssht.  That's not what I call flat. 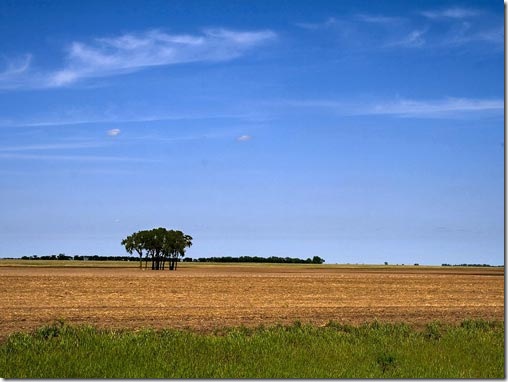 This is what I call flat.  Imagine this picture continuing on for, oh, let's say two hundred miles.  That's flat.

And while surfing for a nice photo of the hinterlandishness of it all, I happened to come across this photo. 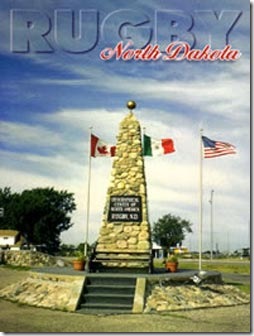 Which leads me to:

3) Did you know that the official geographic center of the North American Continent is Rugby, North Dakota?

Look. There's a plaque and a nifty marker and everything.   I mean, it couldn’t be Lacrosse or Cricket or Bowling, North Dakota right?  Nope.  Rugby.  I've never been there.  Maybe Big in Japan has?  Let's ask her. Yo, Big.  Rugby?

Next I could tell you about how the local college rugby team here (there actually is one, but it is Rugby UNION- gasp) is managed by this Irish bar owner who is from the town in Ireland where I met this girl from the hinterlands of Canada and her brother wanted to go to an Ivy League school to play... hockey.  Sorry.  "Rugby" would have been awesome.  But no, it was hockey and I'm pretty sure they don't play hockey at Ivy League schools.

And the whole thing just goes on like that all day.  Of course, I have a really boring job and a lot of time on my hands to ruminate (have I mentioned that the construction industry is, in fact, dead?  Yeah.  It is.  Dead dead dead.  Slap a shroud on that sucker and dance it to it's grave. Dead.)

And so, patient Gentle Readers, I make you this promise: I will be sewing something soon, I will write about it and this will all seem like a bad distant dream.  In the meantime, you get to suffer through these little walks through my inner life.  Although you really only have yourself to blame.  Well, you’re the one reading this after all.  And I’m in a sewing slump this week.