Forever In Blue Jeans. Not.

Ok, first off, if my tone is somewhat… short-tempered, that’s because I made a whole post about these stupid flippin’ jeans and then proceeded to lose it.  Somewhere.  Possibly because aliens took over my computer and stole it.  Possibly because put it in the Recycle Bin  and then cleared it.  Maybe.

Here then is my NEW POST about these STUPID FLIPPIN’ JEANS. 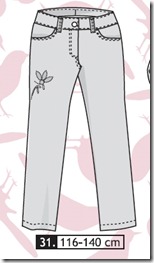 So several weeks ago TLo asked me to pleeeease make her some jeans.  Because she is a perverse little monster who enjoys tormenting her mother to the point of actual insanity.  See, five months ago TLo insisted (INSISTED) that she would not wear anything at all but skirts.  Not dresses.  Not pants.  Not anything unless it was a skirt.  Until two weeks ago when she suddenly decided that she would only wear jeans.

So jeans it is.  Except that jeans are awkward for TLo because of her shape (due to which she wears a minimum of a 7 in width but a 5 in length… which means that if I buy her jeans in a 7, the crotch rise is about three inches too long and really uncomfortable.  Considering she is in kindergarten and spends most of her day sitting on the floor, I decided this was probably a legitimate issue for her.  You try sitting on the floor all day with your waistband under your armpits.  Fun?  Exactly.)

Unfortunately, the jeans I started to make for her caused me so much agony that I finally gave up after a whole weekend of work, broke down and bought her a pair from Walmart (-shudder-).  I had to hem them up about five inches and the crotch rise was indeed three inches too long, but they were jeans.  Then last weekend I went back to the almost-finished jeans and of course they practically put themselves together, it went so smoothly.  This just proves that you should never sew when tired (which my needle-punched fingers can prove).

Here are her jeans.  They are hideous.  Just to prove the  point, I have included pictures of the REAL jeans I bought. 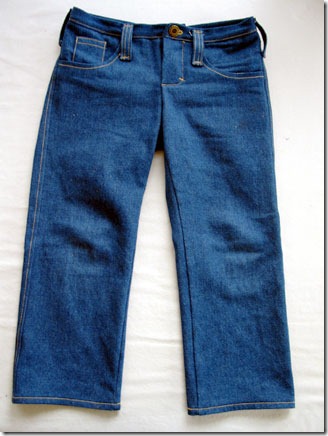 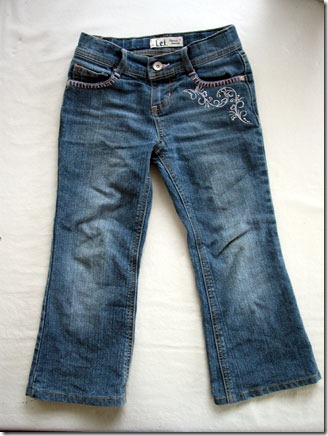 Now granted, I used gruesome fabric (which I got for free, so I guess you get what you pay for).  But still.

These do have the advantage of being very low in the rise so they do fit comfortably when sitting.  In fact, they’re so low that I wasn’t totally sure TLo would be able to wear them.  I cut a size 116, then added 1” to the back leg width down the grainline and shortened by about two inches.  (This is eerily familiar to the amazing sizing discovery I made while working on my pencil skirt.  More on that next time.)

I did do my usual extension of the pocket so that it becomes the interfacing for the fly facing, which I think is a better solution than the RTW.  It keeps the pockets from pulling out, which is nice. 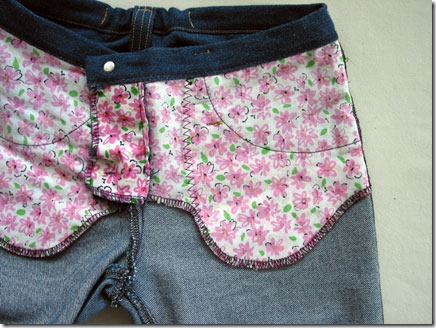 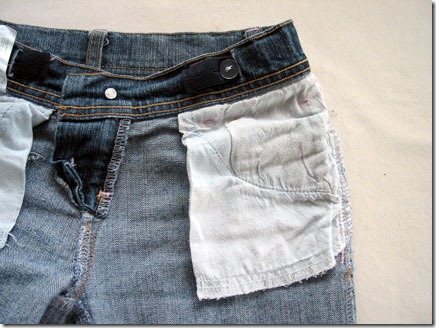 Overlay the pocket piece over the pants leg piece that has the fly front (so it basically looks the way it will when it’s sewn up).  Then trace the fly facing part onto the pocket part and redraw it.  (These are from the disastrous BWOF skirt I did two weeks ago, but it’s the same process.)   Baste the pocket fabric to the fly facing after you’ve sewn the pockets and then treat it as a sewn-in interfacing when you construct the zipper. 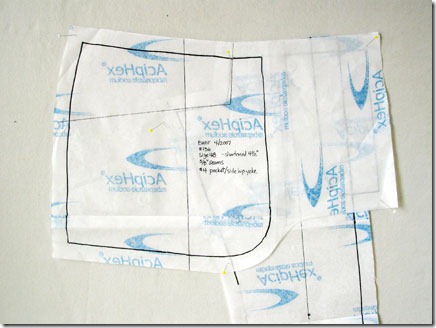 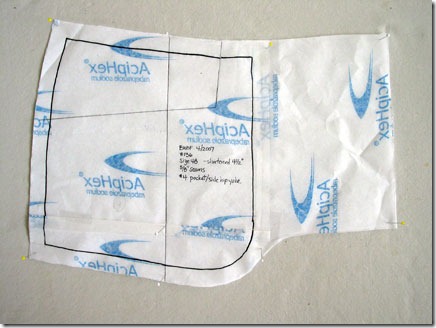 So that worked ok.  Of course, LEI remembered to make actual buttonholes for their buttonhole elastic, so they’re one up on me there.  I had to fix mine with a bit of elastic jury-rigged into the back of the waistband.

In any case, TLo now has two pairs of jeans.   The real pair and this pair. 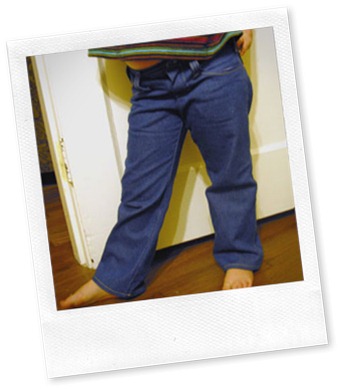 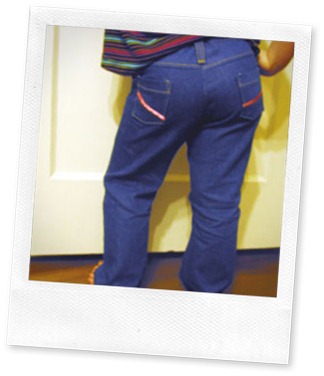 I’m sure next week she will decide that she only wants to wear polar fleece vests and a pink tutu.