In Which I Have An Epiphany. Yes. About Skirts.

So.  I may have mentioned that I was going to make a pencil skirt this past weekend.  But in thinking about it I'm not sure I really meant a pencil skirt, in that I had no intention of having said skirt stop at my knee.  I have fat knees and fat calves and they are not things I like to parade about in the open.  I have much better features that could be exposed and I'd prefer to parade those.  Well.  Maybe.  Whatever.  No knees.

To me, when someone says "pencil skirt" I immediately think of this: 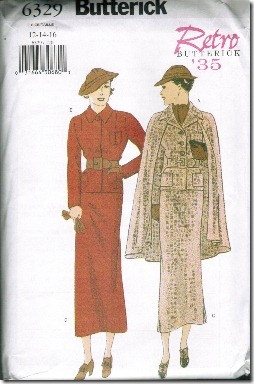 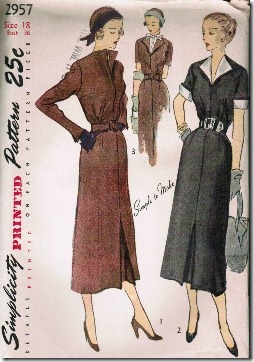 rather than this (which is, of course, what most people think of… what with it being a pencil skirt and all): 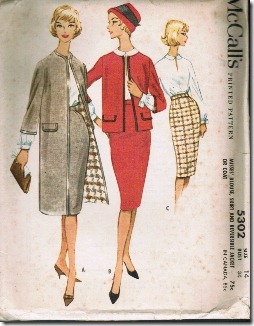 So while I did work on a skirt last weekend and it was straight, I'm not sure it totally qualifies as "pencil". Whatever. 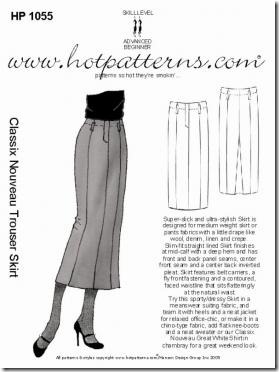 Here's the really interesting (to me, and that's all that counts) part: I finally took the advice given by others for the past five years and managed to scrounge up a garment that fits me the way I want it to, so as to take a flat measurement.  Then I compared this to my (supposed) body measurements and then compared those to the pattern sizes on the envelope.

Scatterin’ Skirts, Batman!  I had to cut two full sizes smaller.  And then add 1.75" back into the back panel (I need some loose for my caboose).  That still made the pattern quite a bit smaller than the size I supposedly “need”.   In any case, by virtue of these calculations I have created... the perfect skirt.  O. M. G.   Yes.  Oh.  Em.  To the flippin' Gee.  The only other alteration I made was to take off 4" from the length throughout the body of the skirt, which is a standard alteration I have to make on everything.   Because I am only 5 feet tall.   Which sucks.  But that's another story.

Why didn't I ever listen?  This was the easiest alteration I have ever made to a pattern.  Seriously, this has been a revelation to me. It was like I was wandering around with my eyes shut and suddenly someone said, "Hey you.  The dummy with your eyes shut.  Yeah, you.  Did you know you can open those things?"  And Lo!  I can see!  You have no idea how much more rewarding sewing this skirt has been knowing that I didn't spend a million hours and/or thought-processes trying to work out how to make it fit.  Plus when it was done... it fit!

So I suppose you want to see this Miracle Skirt, right?  Hmmph.  Well, now I'm a little anxious about posting it, because of course it's miraculous to me but to everyone else it's just a boring old straight skirt.  Do I care?  NO!  Ha.  So here is the "wearable muslin" that I made, which I might actually just wear.  Gasp.  I know.  Unbelievable. 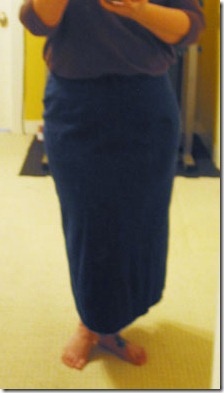 OK, fine.  Maybe it doesn't fit perfectly.  I didn’t adjust the back to add an inch to the length (another standard adjustment that I obviously still need as you will see below).    I also have a wrinkle over my left hip (reversed in the mirror in the picture above) that I’m pretty sure is a sewing issue and not a fitting issue, but I’m not totally sure.  Still, it sure as heck fits better than anything else I've made to date and we won't even go there on comparing it to RTW.  At least I now have a good pattern to take measurements from and make comparisons for future garments.  That’s something of a personal coup. 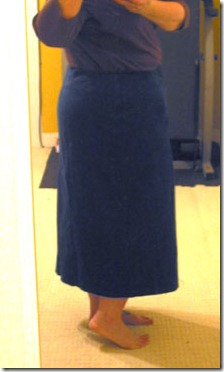 a) the really bad lighting

c) the fact that I have my very long shirt tucked into the waist, which I wouldn’t normally do.

It is for educational purposes only.

Probably it's a bad sign that this is one of the better-fitting and nicer things I own, right?  But next week: A Real Skirt Made With Real Fabric.   Amazing.

(edit: I should have mentioned that I made this muslin in what is rapidly becoming The Fabric Of Our Lives, that same free denim that I used for TLo’s Terrible Jeans.  It’s hard to see in pictures, but this fabric really is ugly. I purchased 12 yards of it to make comforter covers for the girls’ beds.  It perfectly matches their denim curtains from Walmart and it’s great fabric for comforter covers.  It is not, however, great fabric for clothing.  The reason I say it’s free is that while I purchased 12 yards, I somehow ended up with 24 and I could not get the salespeople to deal with taking it back.  I did try.  Really.  Extensively.  I do not believe in the Well-They-Made-The-Mistake-And-Gave-It-To-Me-So-If-I-Keep-It-Then-That’s-Not-Stealing theory of life.  But since they refused to take it back, I finally figured I could use it for muslins.  And that’s what I’m doing.)