In Which I Can’t Think Of A Title

A certain selfish person recently inspired me to go through my back issues of BWOF.  Every month when my new issue arrives, I immediately photocopy the line drawing insert and file it in my Pattern Binder.  After I've perused the actual magazines, they dutifully go into the magazine file and I hardly ever look at them again.

I do frequently peruse my pattern binder.  As you all know, what you see in the line drawings of BWOF look like a whole 'nuther animal in the photo shoots.  Whole 'nuther.  So I thought to myself, "Self, you might should take a 'nuther little look-see at those photo shoots."   Apparently my self is now from the hills of Kentucky.  Anyhoo, a little look-see I have taken.  And can I just say: WTF?

People wonder why patterns don't fit them?  I give you exhibit A. 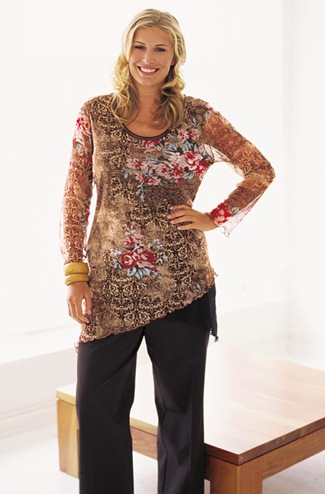 What is up with that girl's sleeve?  I mean, we're just going to completely ignore the whole "this is a plus-sized model who has arms like twigs" thing.  But look at that armscye!  Yikes.  Who would that fit?  Even my really truly plus-sized sausage arms wouldn't make that sucker work.

And no, I'm not trying to single-handedly destroy Burda Fashion or anything (despite evidence to the contrary).  This is hardly a phenomenon unique to them.  It's just that they had the misfortune, or rather lack of insight, to shoot this particular transparent top in such a way as to be completely unable to hide the flaw.  That's their mistake, no doubt about it, but every other pattern company I've ever dealt with (with the exception of one, who seems to consistently have the opposite problem) has this type of armscye issue somewhere along the line.   Which does somewhat beg the question of how mere mortal home sewseamstressers are supposed to cope.

You know what would be cool?  Spray-on clothes.  You know, like in the movie "Cloudy With A Chance Of Meatballs" (which I have seen waaaay too many times).  Spray on shoes?  Like that.  Spray-on clothes.  Then we could all just walk around in big blobby coatings of rubber.  Like pod people.  Ooooooo.  Pod people.